Vietnam’s farm produce remains unsold because of the closure of border gates.

Retailers have decided to collect watermelons and dragon fruit in large quantities for distribution in response to the call to rescue Vietnam’s farm produce. 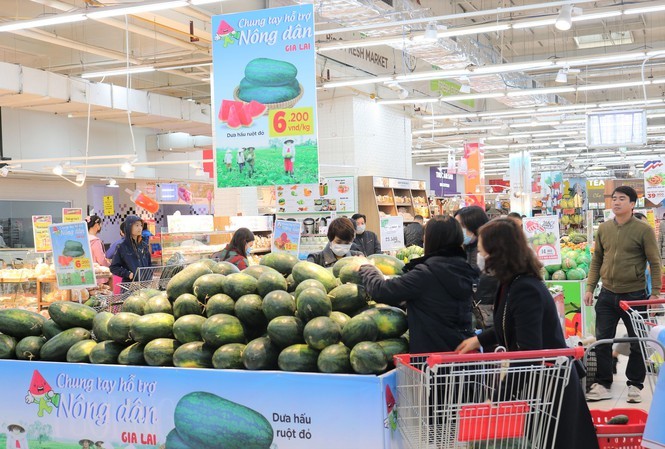 After one week of selling the ‘rescued farm produce’, Big C and GO! said the two chains sold 100 tons of watermelon and 70 tons of dragon fruit each day.

Meanwhile, Kim Dung, director of Sai Gon Co-op in Hanoi, said the retailer is selling rescued farm produce, but the sale may be interrupted at any time.

She went on to say that the rescue campaign shows the great potential of the domestic market, calling on management agencies, local authorities and farmers to increase domestic sales.

According to Nguyen Thanh Thuy, deputy general director of Vincommerce, which owns Vinmart, said the retail chain can consume hundreds of tons of water melon. However, when she contacted farmers to discuss the collection of watermelon in the rescue campaign, she was told that farmers did not have products to sell.

“Vinmart wants to collect 60 tons of water melon a week in Gia Lai, but the delivery is in dribs and drabs,” she said.

Representatives of supermarkets, local authorities and farmers expressed disagreement at the meeting organized by the Ministry of Industry and Trade.

Supermarkets said they cannot collect enough products for retailing. Local authorities said the inventory level is high but they don’t want to sell domestically, and want to export at high prices.