Farmers are seeing dropping prices and huge inventories after border trade with China was halted due to the Coronavirus. 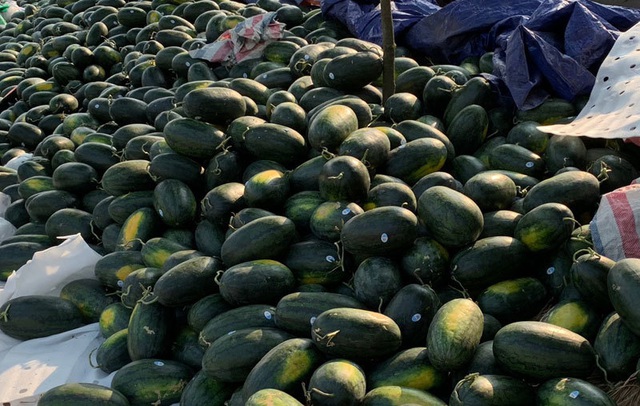 Nguyen Duc Giang, a watermelon trader in Gia Lai Province, said since they couldn't export watermelons to China, prices had dropped. Last year’s harvest, a kilo of watermelon was sold for VND7,000 (3 US cents) to VND9,000 at the garden, but this year prices already dropped to VND800 to VND1,000. In the end, traders could only earn VND3,000 to VND4,000 per kilo.

"It is watermelon harvest season in Gia Lai and Central Highlands. Last year, I was able to export 5,000 tonnes to China but because of the outbreak, the border has been closed this year," Giang said.

It costs the farmers VND160m (USD6,800) to grow one hectare of watermelons with a yield of some 40 tonnes. However, with the low prices, they will face a loss of over VND100m a hectare since the majority of the watermelons are grown for export to China. The domestic market is oversupplied.

Hoang, a farmer in Kon Tum, said he grew three hectares of watermelon and would definitely incur hundreds of millions of VND in losses since he only sells a kilo at VND1,000 to VND1,200. According to a trader, his watermelon trucks were halfway to the border gate when the Chinese partner informed him about the border shut down due to the outbreak. He had to sell the watermelon at lower prices in the domestic market.

In Hanoi, a large amount of watermelon is being sold widely on the pavements at VND8,000 a kilo.

Meanwhile, Long An, Binh Thuan and Tien Giang provinces are also in the same situation with dragon fruit exports. Farmers and traders that export agricultural products to China via border trade are facing great difficulties.

On February 3, Minister of Agriculture and Rural Development Nguyen Xuan Cuong held a meeting with the Ministry of Industry and Trade and leaders of six border provinces as well as firms to discuss the problem and find solutions.

According to the Import and Export Department under the Ministry of Industry and Trade, China would officially open the border gate on January 31, however, the PingXiang City Committee for Foreign Economic Trade later announced that all activities would be halted from January 31 to February 8 to carry out preventive measures against coronavirus.

Over 100 dragon fruit trucks have been stuck at Lang Son Border Gate and another 150 trucks are stuck at Lao Cai Border Gate. Some trucks have turned back in order for their cargo to be sold in the domestic market. Vietnamnet/Dtinews