The UAVs conduct aerial reconnaissance to find insect-infected areas. They also spray chemicals on the infected parts of crops, thus saving up to 99 percent of pesticides. 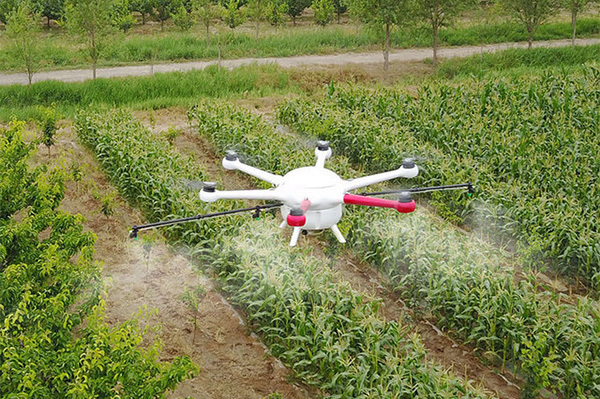 The drones from MiSmart are the achievements of a group of young developers headed by Pham Thanh Toan, CEO (chief executive officer) of MiSmart, and his co-worker Tran Phi Vu, who is now CTO (chief technology officer) of the project.

Toan and Vu were friends at high school, but did not keep contact until they accidentally met again on Tet holiday. At that moment, Vu was a PhD student studying UAV at New South Wales University in Australia. Toan had for many years been developing machine learning software and AI.

They decided to set up MiSmart, a project making specialized drones for different purposes.

Farmers use the drones in an automatic, semi-automatic or manual mode. The devices are designed to be resistant to dust and water. They can also be folded after use.

MiSmart’s drones have a common characteristic in that they are made of carbon fiber, lighter than aluminum, but are 5 times firmer than titanium, capable of lifting heavy objects weighing up to 22 kilograms.

This is one of the rare drone models made fully by Vietnamese, from its hardware to its software design.

MiSmart’s drones go ‘scouting’ by sending maps to the server and discovering insects thanks to AI and spray chemicals. All of these metrics are on an IoT platform for management. Farmers can know the exact areas that need chemicals spraying, and there is no need to conduct many drone operations.

The drones are programmed to support the spraying of plant protection chemicals over large farmland areas, and they can move up or down or navigate in accordance with terrain conditions.

MisMart doesn’t use AI cameras. Instead, it uses low-cost high-resolution cameras. After drones take pictures and send images to the server, the images are analyzed by AI to find the abnormal points. Drones continue to fly to those points to capture more images and identify insect areas. These are the outstanding features provided by AI technology which the naked eye cannot discover.

If compared with traditional spraying methods, MiSmart’s drones operate 40 times more effectively thanks to radar. The radar scans the land area below and maintains reasonable spray distance, thus saving on chemical use.

A drone device from MiSmart sells for VND200-250 million.

MiSmart also plans to use technology in forest management, mapping and rescue activities.

MiSmart’s major clients are not farmers, but agriculture co-operatives, spraying companies and large agriculture production corporations. These clients have certain knowledge and thus it is easier to transfer technology.

According to Toan, each area has its own terrain characteristics, so drones are designed depending on the area so they can operate most effectively.

According to Toan, the biggest difficulty in manufacturing drones is weak supporting industries. MiSmart can manufacture mechanical parts and develop software, but it still has to import motors and batteries.

Flying permits are also a big problem. Not all clients of MiSmart can get a license, which is an obstacle for its products to reach the market.

Hanoi aims to build a digital transformation strategy to turn the city into ASEAN's center for cyber security, artificial intelligence and big data.

The Party and State define agriculture, farmers and rural areas as a significant part of the national industrialisation, modernisation, Prime Minister Nguyen Xuan Phuc has stated.