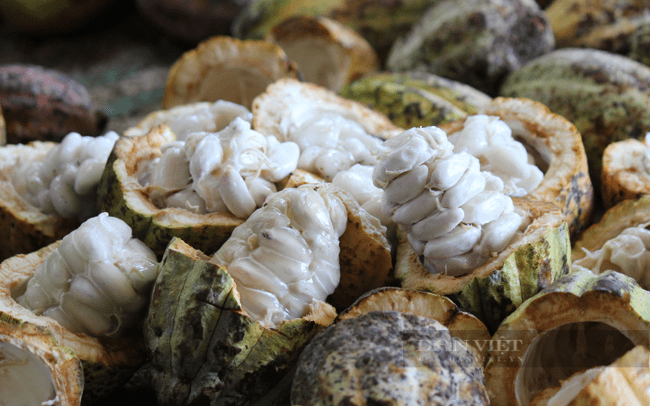 In cocoa growing areas, after harvesting and taking cocoa beans for processing, a small part of cocoa pods will be dried and burned. The remaining part, including pods and flesh, are thrown into river, or thrown back where they will decompose. This causes environmental pollution.

But cocoa pod turns out to be worth billions of dollars. Trong Duc Cocoa Co Ltd in Dong Nai province said it can process cocoa pods to get pectin, a type of fiber used in food production and processing. The company has two wine products made from cocoa pods and flesh, which are favorites in the market.

Dang Tuong Khanh, director of Trong Duc Cocoa Co Ltd, said the revenue from growing for only cocoa beans will be modest. The company therefore tries to make diverse products from cocoa. It discharges 5,000 tons of cocoa pods from the cocoa production process that are used to make wine and valuable products.

Pham Van Hung, a representative of a research team at HCM City International University, said most dragon fruit has been exported raw so far. South Korea and Japan import Vietnam’s dragon fruit and process the fruit into many valuable products which are 5-7 times more expensive.

Some Vietnamese enterprises are trying to process dragon fruit into wine, fruit juice and dried fruit. The by-products such as dragon fruit skin and seeds are raw materials to make extracting essential oils, juices, and functional foods.

Khoa Hoc va Doi Song newspaper (Science and Life) reported that Truong Thi Cam Trang from the HCM City University of Natural Sciences and her team can create bio-pectin film from dragon fruit skin which is used as a food wrap.

The team said the pectin film is waterproof and does not oxidize quickly. After seven days of burial under the soil, the pectin film can decompose by up to 62.5 percent. The team also plans to make self-dissolving medical threads from this pectin film.

Moi Truong (Environment) Journal reported that by-products from the shrimp processing, including shrimp heads, shells, liver and pancreas, which account for 35-45 percent of shrimp weight, are discharged directly into the environment. Only 33 percent is used to make products with low added value, such as fertilizer and animal feed, and 7 percent is used to make food and pharmaceuticals.

Shrimp by-products contain precious nutrients such as protein (55 percent), chitin (9 percent), minerals (22 percent) and fat (12 percent). If the nutrients can be extracted in an optimal way and the activity is preserved, new products will be created and can be useful in many industries.

The model is estimated to bring value of $4-5 billion a year.

Bui Thi Bich Ngoc in Thanh Hoa City said in 2016 she read an article about the research of Dr Rosuko from Thailand about Eco Enzyme. Under the method, people manually compost and ferment agricultural waste and fruit peels to create biological products friendly to the environment.

Ngoc found that the materials are available in Thanh Hoa province. She decided to create a kind of biological cleaning water from pineapple peel and other peels rich in vitamins and essential oil.

The products are displayed at clean food shops and supermarkets in 63 cities and provinces. Her company provides 10,000 products each month which brings revenue of VND200 million.

Many enterprises in Dong Thap and An Giang provinces process rice husks (shells of rice grain) into firewood for export.

A Dong Thap-based company presses rice husks into balls and sells at VND1,000 per kilogram. Each month, the production facility exports 10,000 tons of rice husk firewood to South Korea and Europe. The product is popular because it doesn’t cause pollution.