Many drivers borrowed money to buy cars and motorbikes to work as partners of e-hailing firms, which promised high incomes. 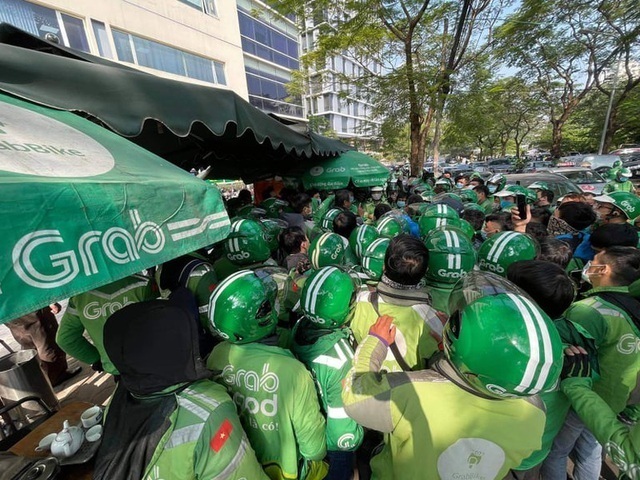 Grab, for example, when entering Vietnam, promised income of VND26-33 million a month on average to those working full time. The income could be up to VND35 million on peak days (holidays, rainy days). Those who worked 4-5 hours a day could earn VND15 million a month.

However, for many drivers, this has not occurred.

Nguyen Tuan Minh from Nam Dinh said he has been working as a Grab motorbike driver for two years. He gave up his previous job to become a partner of Grab and became the major income earner of his family.

His home is 80 kilometers from Hanoi, but he has never returned home since Tet because he has had to work all the time. Minh starts work at 6 am every day, including weekends, rainy days and holidays, and finishes at 8 pm.

“I spend 12 hours a day on streets. Drivers like us ‘sell our health for money’,” he said.

Asked about the income, he said at first, the rate taken by Grab was 15 percent, then rose to 20 percent and is 30 percent now. ‘It is unbearable for us,” he said.

According to Minh, the biggest concern is the rate taken by Grab, not the decline in customers.

Le Ngoc Tu, a bachelor’s degree graduate, could not find a job after graduation, so he decided to work as a Grab driver after trying many different jobs, from real estate broker to dairy product seller.

Tu said he has to work every day, with no day off. The income has dropped, though he still has to pay for vehicle maintenance and petrol.

GrabCar drivers are also in the same situation. Nguyen Van Thang, a driver, said he borrowed money from a bank three years ago to buy a Kia Morning.

“Previously, I could earn VND20 million a month, which was high enough to pay bank debts and support my family. But things have changed. The income is too low, not enough to pay debts, ” he said.

The rules of the game

Drivers are called ‘partners’, but the policies are determined by Grab.

Grab raised the required discounts recently, which prompted drivers to go on strike. However, the drivers’ efforts were in vain. Grab still adjusted the required rate taken by Grab which increases year after year, and tightened conditions and bonuses for drivers.

Grab applies a policy which allows it to differentiate between full-time and part-time drivers. The latter receives lower priority in receiving orders and bonuses.

Full-time drivers are classified based on ‘stars’ and the percentage of ride cancellations and receptions.

Lawyer Tran Vi Thoai said Grab is a technology firm that only provides software service, and doesn’t employ workers. Grab only cooperates with drivers under the partnership mode and they share revenue. Therefore, partners have to be solely responsible for their benefits and have to take risks themselves.

Meanwhile, management agencies find it difficult to apply regulations on social insurance, health insurance and unemployment insurance for ride-hailing drivers as stipulated by the Labor Code.

Tu, a driver, said if drivers don’t accept thecnew policies laid down by Grab, they only have one choice – to quit. But, drivers dare not give up the job as they have to make money to pay back the loan taken out to buy a car or motorbike.

Tu said his account was locked by Grab for unclear reasons and he only got the account unlocked after many complaints.

Another Grab car driver said Grab once unilaterally locked his account, though his proportion of ride cancellations was less than 25 percent.

“Grab only listens to clients, and it doesn’t double check with drivers. This leads to serious consequences to partners,” he said.

After Grab launched the new charge policy, many drivers have complained they could not understand the ‘terminology’ used by Grab in the notice to drivers. The discussions between Grab and drivers have not come to an end.

Vietnam is narrowing the gap in competition between ride-hailing businesses and traditional taxis by imposing 10 per cent VAT on the former.

Under a new regulation, from December 5, ride-hailing services will be taxed 10 percent instead of the current 3 percent.