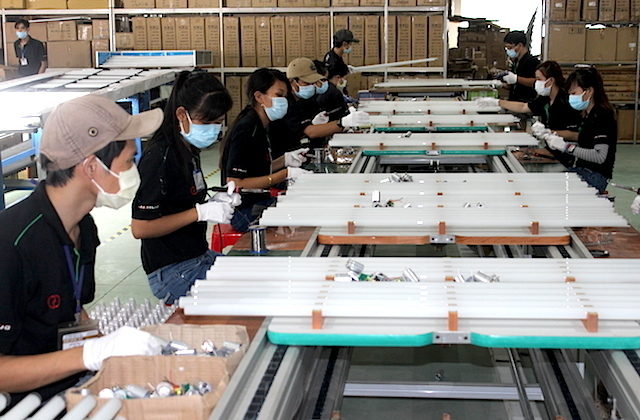 The State Bank of Vietnam (SBV) has repeatedly asked commercial banks to slash lending interest rates in order to help clients overcome difficulties caused by the pandemic. However, it is still difficult to access preferential loans from banks.

The general director of a wooden furniture manufacturer in HCM City said he still cannot access any funds from the preferential loans programs launched by banks.

In order to get loans at an interest rate of 7 percent per annum, businesses have to satisfy a lot of requirements, including criteria that is difficult to meet in current conditions.

A mechanical engineering company in HCM City said it is a loyal client of Vietcombank and is listed among good businesses with high credit ranking, subject to preferential loans, but it still has to pay 8.7 percent per annum for 6-month loans.

Vietcombank is one of the big four state-owned banks which are offering lending interest rates that are lower than rates from joint stock banks.

Most businesses can only get short-term loans, and the average interest rate is 9 percent per annum for six-month loans.

A plastics manufacturing company in Hanoi confirmed that the interest rates offered by banks are 9 percent or higher, which is unbearable for businesses in current conditions. Meanwhile, the interest rate of an older loan is 10.5 percent per annum and banks refuse to cut the rate.

While businesses complain about difficulties in production, most commercial banks reported a profit increase of 55-65 percent in the first quarter of 2021. This was attributed to the big gap between deposit and lending interest rates.

Meanwhile, they require high interest rates of 8.5 and 9 percent per annum for loans.

“While banks only have to pay 3-5 percent per annum for capital, they charge businesses 9-10 percent. The banks’ preferential credit packages are just an ‘exhibition’, which you can only visit and see, and cannot touch them,” a businessman said.

When will interest rates go down?

Nguyen Van Ket, Director of SKD Vietnam, said to borrow money from banks, businesses must have turnover and have collateral for loans, but they are now in difficulties because of the pandemic, and turnover is small. Therefore, it is very difficult to access bank loans at this time.

Vo Tri Thanh, former Deputy Head of the Central Institute of Economic Management (CIEM), said the Covid-19 outbreak has had an adverse impact on businesses, pushing them into a deadlock. In such conditions, credit policies will play an important role in helping businesses overcome difficulties. Capital will help businesses restructure, and make investments to uograde infrastructure and technology to adapt to the new circumstances.

He has proposed that the State Bank of Vietnam create favorable conditions for businesses to access preferential credit packages by simplifying lending procedures.

Economists said that as the outbreak has reoccured, capital sources among the public are no longer profuse and banks’ capital mobilization growth rate is lower than the lending growth rate. As a result, some banks are facing liquidity problems, which means that the deposit interest rate is under pressure to go up.

Analysts believe a new interest rate floor will be set in the second quarter.

As such, the hope for accessing cheap capital seems to be far away.

Some commercial banks have raised deposit interest rates following an 8-year inflation rate high in February. Analysts believe a new interest rate floor will be set in the second quarter.