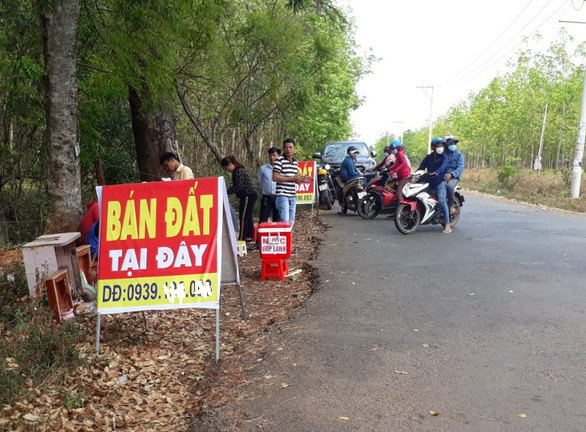 The land prices in Hon Quan district in Binh Phuoc province soared in the first two months of 2021 because of the news of the development of an airport there.

People rushed to speculate land for resale, hoping to get rich overnight. However, the real estate bubble burst some days ago, causing land speculators to lose tens of billions of dong.

Hon Quan authorities said it’s unclear about the project and there’s no further information except for a fact-finding trip by agencies.

However, this was enough for land brokers to push land prices up and make big profits.

The same occurred with land prices in the area projected for Long Thanh International Airport. Though the airport project has just kicked off and transport infrastructure items are still under construction, the land prices have skyrocketed.

Dinh said the land prices there risen not only because this was the area for an airport in the future, but also because land supply in HCM City has become scarce and people have to look for land in neighboring provinces.

A report from the association showed that land prices in Dong Nai in 2019 hovered around VND12-14 million per square meter, then surged to VND22 million in 2020. As such, the prices in some areas doubled after just one year.

On real estate trading websites, one can easily find ads about the sale of agricultural land that is going to be converted into building land, or land planned by local authorities for residential development.

The land plots in the communes of Loc An and Bau Can have the highest prices in the areas being hunted by many people.

A broker said some families in An Loc commune sold their land at VND1 billion per sao in the past but now regret the sale because the land price has become much higher.

Some landlords are refusing to sell land at VND4-5 billion per sao, because they believe the prices will rise further, when infrastructure around the airport is built.

Airport is not 'magic wand'

Most land fever attacks are the result of the ‘crowd effect’. Many people want to buy land at the same time, which pushes prices up while demand is limited. Land fever becomes artificial when the land value no longer truly reflects the real value and real demand, and land valuation is based on unclear information and rumors.

Analysts say that land prices escalate not because of high demand for accommodation, but because of speculation. Some people become billionaires after the spells of land price escalation, while others lose all their money.

Su Ngoc Khuong from Savills Vietnam said that the airport that Binh Phuoc province plans to build is not a ‘magic wand’ that can help develop the local economy just in a short time. One airport cannot create a breakthrough for the entire province.

Khuong said that airport development remains an idea that needs to be considered and approved. Local real estate prices depend on many other factors. Besides the information about development planning, news about the economy can help increase the value of assets and create a driving force for the market development.

The BInh Phuoc airport will take at least 5-7 more years to get approval and another 3-5 years to build. So, it would take about 10 years from the time of surveying the field to the time of completing construction. It will take 5-10 years more to operate the airport effectively and lure more nvestments.

Not all localities develop strongly after building airports. The airports in Da Nang and Nha Trang have helped their local economies, but Phu Cat Airport in Binh Dinh has had a modest influence on the provincial economy.

There are 22 civil airports in Vietnam, including 13 domestic and nine international ones. But only six of them are making a profit, according to the Civil Aviation Authority of Vietnam (CAAV).

The land rent in industrial zones has seen a year-on-year increase of 20-30 percent, according to CBRE Vietnam.