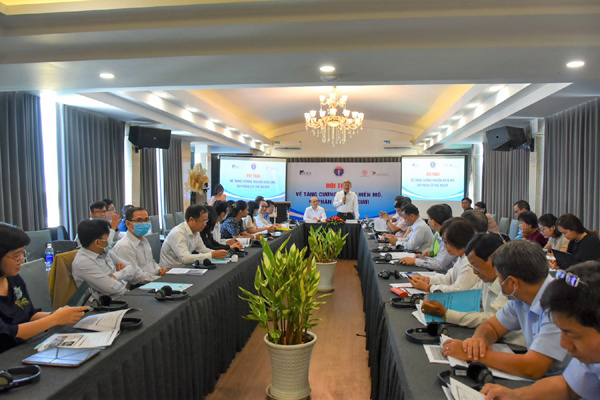 Thousands of patients need organ transplant operations every year but the number of donors remains small, according to Deputy Minister of Health Nguyen Truong Son who spoke at a workshop on human tissue and organ donation sources held in HCM City on March 22.

He asked agencies to propose an amendment to the National Organ Transplant Act and submit the draft of the amended law to the National Assembly in 2022. He said it is necessary to reconsider the age of people who can donate organs and simplify procedures to create a clear legal framework for organ donation from brain-dead people.

At the workshop, experts put forward many issues and solutions to help people have more open views about organ transplantation.

Nguyen Hoang Phuc, Deputy Director of the Vietnam National Coordinating Center for Human Organ Transplantation, confirmed the low number of patients who have had organs transplanted over the last 29 years, since the first organ transplant operation was conducted by the Military Medical University and Cho Ray Hospital.

Phuc reported that as of December 31, 2020, the total number of organ transplant cases had reached 5,587 nationwide. Of these, kidney transplants accounted for the largest proportion with 5,255 cases.

The first kidney transplant in Vietnam was conducted on June 4, 1992 at the Military Hospital 103. The recipient was Vu Manh Doan, 40, while the donor was his younger brother, 28.

Phuc pointed out that there are problems in policies and laws, which lead to a serious lack of organs for transplants. Meanwhile, organ trafficking remains a burning issue.

There are also problems at some organ transplant facilities: they still have not established a brain death council; have not received licenses; or have conducted transplants on patients whose names were not found on the national waiting list.

Phuc has suggested solutions, including the amendment of the law. Vietnam needs to observe The Declaration of Istanbul on Organ Trafficking and Transplant Tourism; formulate a coordination cost package as a basis for payment and apply it nationwide; build a kidney transplant service package as the basis for health insurance to pay at a rate of 80 percent; and only carry out transplant operations for those on a waiting list.

Tran Ngoc Sinh, Vice Chair and General Secretary of the Vietnam Organ Transplant Association, said the demand for organ transplants increased after the first kidney transplant, because the majority of patients have good health after the transplant.

Sinh said that Vietnam now can transplant many human organs, but organ donation is limited in the context of increasingly high demand.

Traffic accidents cause thousands of deaths every year. Because of spiritual beliefs and legal problems, the organs of these people cannot be donated.

With the strong development of science and technology, kidney transplantation can be implemented even though donors and recipients don’t have the same blood type. The kidneys that have urine after transplantation account for a high percentage.

He also mentioned that organ trafficking is a burning issue not only in Vietnam, but globally as well. He believes that there should be a strong legal system and heavy sanctions on violators to stop the trafficking.

In Thailand, for example, both organ traffickers and doctors who help take organs are punished heavily and doctors will have their practice licenses revoked.

He suggested developing software to manage registration and coordinate organ sources to provide information in a transparent way.

Tran Hoai An from the Hue Central Hospital stressed that it is necessary to coordinate the sources of organs for transplants. Those waiting for transplants must register at the national coordination center.

Nguyen Huy Quang, director of the Legal Department of the Ministry of Health, admitted that organ trafficking is a ‘sensitive issue’. Many trafficking cases have been put into prosecution by investigation agencies, but there are no official statistics about the number of cases.

Meanwhile, dead donors will be given financial support for burial service, equal to 10-month basic salary. However, the regulations still have not been applied.

Private investment is forecast to keep flowing into the healthcare sector in the time ahead with the appearance of many new drivers.