Here is the second part of  the online roundtable talk organized by VietNamNet with Ambassador Le Luong Minh, former secretary general of ASEAN, former head of the Vietnamese Delegation at the UN, and Do Hung Viet, director of the Ministry of Foreign Affairs’ Department of International Organizations.

In the first month at the Security Council, Vietnam proposed an initiative on a cooperation meeting between the United Nations and ASEAN. This initiative creates a first-time cooperation and exchange forum between the two organizations. What can you say about this event?

The ASEAN-UN cooperation began in the 1970s mainly in the activities for development. In 2011, the two sides signed a declaration on upgrading the cooperation to a comprehensive partnership, and since then, the two sides have held high-level meetings between the leaders of ASEAN and the UN Secretary General annually. 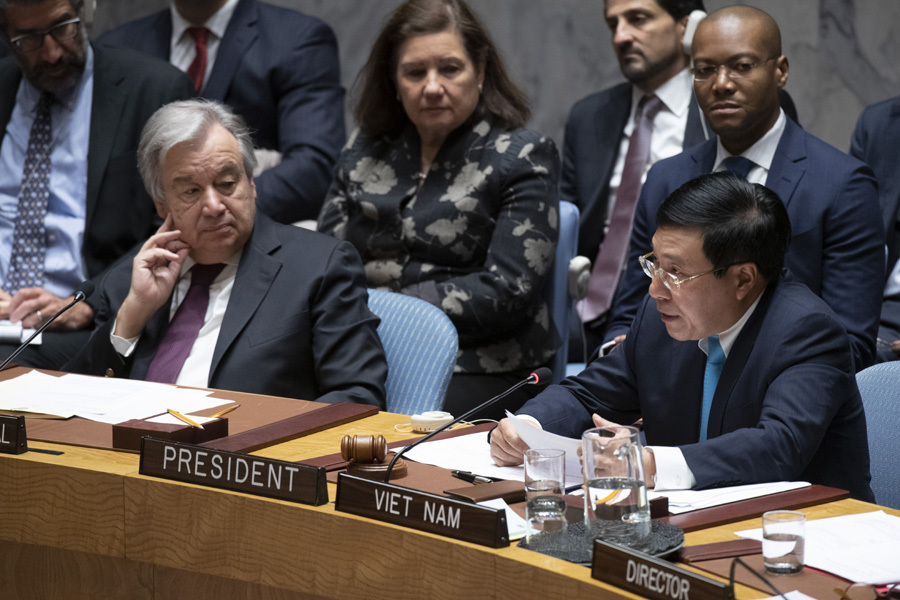 The fact that the Security Council for the first time organized the ASEAN-UN cooperation session has contributed to heightening the awareness of the role and contribution of ASEAN, as well as the importance of the cooperation between the two sides, and affirmed the ASEAN's central role in maintaining peace, security and stability in the region.

And at the same time created opportunities for ASEAN to share with the international community its viewpoints in resolving regional issues.

The organization of the first session on the ASEAN-UN cooperation is our great success when taking on dual responsibility – chair of ASEAN and non-permanent member of the Security Council.

Mr Do Hung Viet, in some cases, where there is difference and disagreement among member countries, how did Vietnam act to show its balanced stance, both meeting the legitimate concerns of countries and the common concerns of the international community?

Conflicts occur in many different regions, from America and Europe to Africa and Asia. Therefore, it is a great challenge for us to undertake the role of the non-permanent member of the UN Security Council - the most important mechanism in keeping international peace and security which requires dealing with all complex issues in the context of fierce competition among big countries.

It is necessary to define national benefits for Vietnam, which is maintaining a peaceful and stable environment for development; benefits in strengthening bilateral relations with big countries, neighboring countries and partner countries; benefits in supporting the Security Council to make decisions to serve common international interests in peace, stability, security and development.

The other principle for us when dealing with tough issues is that we always rely on international laws and the UN Charter.

In January, Deputy PM and Minister of Foreign Affairs Pham Binh Minh presided over the open discussion session with the theme: 75th anniversary of the United Nations: complying with the UN Charter to maintain international peace and security. The event attracted the highest ever number of members of the Security Council.

We upheld the role of the United Nations Charter with the basic principles of respect for independence, sovereignty and territorial integrity, no interference in internal affairs, no use of force or threats to use force, and resolution of disputes with peaceful means.

Based on these principles, we always find reasonable ways of treatment. Sometimes one country or another may say that we choose this or that side. But we always insist on choosing our interests, choosing the general principles of the UN Charter and international laws to build our stances.

Ambassador Le Luong Minh, could you please let us know the comments of the international community when Vietnam assumed the role of the non-permanent member of the UN Security Council?

Leaders of ASEAN, the United Nations and other countries in general give positive assessments about Vietnam's participation and contribution. They believe that we have a very consistent, balanced, responsible and consistent stance. The countries see Vietnam as a reliable partner, which helps them reflect their stance objectively.

Has Vietnam achieved the goals it set when joining the UN Security Council, Mr Do Hung Viet?

We have been at the Security Council for six months, or just one fourth of the path. However, we have gained initial important achievements - implementing the foreign policy laid down by the Party and State.

We can serve and protect the direct concerning interests of Vietnam, contributing to creating a peaceful and stable environment for development; and raising our voice to help reduce tensiond in many locations, creating conditions for peacekeeping operations, humanitarian assistance activities in conflicted areas.

All these things have made important contributions to the protection of the fatherland early and from a distance in accordance with the spirit of the Strategy to protect the Fatherland in the new situation that the Party has adopted.

What are the benefits Vietnam has gained in the last six months?

Perhaps the great benefit that we have achieved is to contribute a voice to the Security Council, so that the council makes decisions to support the efforts to reduce tension in many conflicts, enabling parties to sit down to discuss solutions for settling disputes with peaceful means.

In other words, we create a more stable international environment that directly serves our own interests – development.

Some friends asked me why Vietnam joined the Security Council, and what benefits Vietnam can get when dealing with the issues in Africa and the Middle East, which are far away from us.

When joining the Security Council, we have the chance to show our views on many issues, such as the conflict between Egypt-Ethiopia and Sudan related to hydropower dam. Our view is that cross-border water sources must be used in a sustainable way. Thereby, we can mention our viewpoint on the important issue for us – the sustainable use of Mekong River water.

Currently, the competition among big countries is very stiff. Multilateral institutions face challenges as unilateral actions of power that do not respect international laws and infringe territorial integrity tend to increase. So what are the orientations for Vietnam in the remaining 17 months as the non-permanent member of the Security Council, Mr. Do Hung Viet?

The path ahead is long and full of difficulties. There are two orientations that we pursue. First, strengthening the role of international laws, the UN Charter, and the role of regional organizations, especially the images and position of ASEAN.

Second, in addition to solving regional issues and conflicts, we hope that Vietnam will continue to leave imprints. In order to do this, we have defined some priority issues to promote.

The first is the story about overcoming the consequences of war, including dealing with the challenges posed by the problem of mines and ERW.

Would you, in the upcoming 17 months, expect to receive the ‘paper of goodwill’ like the one Le Luong Minh once received?

I hope that when finishing the term at the Security Council, I will receive a paper from Minh with the congratulation on task fulfillment.

From the international perspective, we just hope that if there is a paper of goodwill, the sender thanks Vietnam for its practical contributions to the activities of the Security Council.

‘Paper of goodwill’ from ambassador of a powerful country

Amid global uncertainty, Vietnam continues to attract fresh FDI and remains an exception to a subdued private investment outlook of the Southeast Asian region in recent quarters.

The ASEAN Connectivity Coordinating Committee held an online consultation with dialogue partners and other partners on August 26 under the chair of Ambassador Tran Duc Binh, head of Vietnam’s delegation to ASEAN.