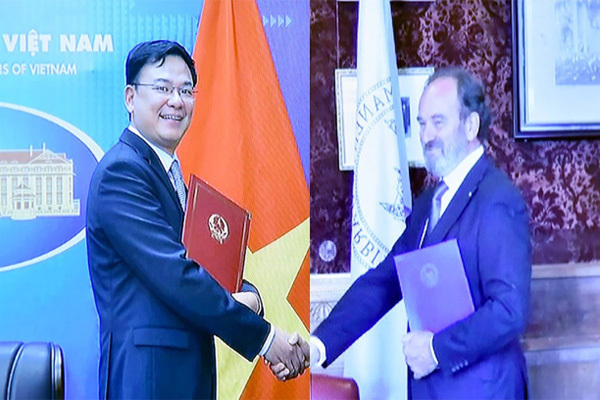 The Ministry of Foreign Affairs (MOFA) and PCA on October 27 announced that PCA will set up an office with staff in Hanoi to conduct PCA hearings and meetings. This will be the fourth office of PCA, except for the main office in The Hague.

The establishment of a PCA office in Hanoi represents a further step of cooperation in realizing the targets set out in the Host Country Agreement signed by the PCA and Vietnam in 2014.

In the late 19th century, the achievements of the industrial revolution led to trade and investment growth in many European countries. But it also led to an increased risk of war among these countries. To avoid the risk of war, many countries from Europe, Asia and Mexico decided to participate in the Peace Conference in 1899.

The peace conference ended up with the signing of a convention on peaceful settlement of international disputes by the participating countries in The Hague. After the success of the Alabama case, the signatories to the 1899 Convention also agreed on the establishment of a permanent arbitration institution to use arbitration for the settlement of international disputes. This was the establishment of PCA.

The 1899 Convention says with an aim of preventing, as much as possible, the use of force in relations between countries, the States participating in the convention agree to use their best efforts to ensure the peaceful settlement of international disputes.

The States also acknowledge that for legal matters, especially in the interpretation or application of international conventions, arbitration is the most effective and at the same time the fairest means to settle disputes which cannot be solved by diplomatic channel.

PCA was officially established in 1900 and became operational in 1902. In 1907, the second peace conference was convened with the participation of other countries from the Central and South America. The 1899 Convention was amended and supplemented with the principles of conducting arbitration proceedings.

At first, PCA was established as an institution to settle disputes among countries. Later, in 1930s, PCA expanded its practice and began conducting conciliation and arbitration activities for international disputes between nations and other private subjects.

The opening of the PCA representative office in Hanoi is the result of the process in which MOFA represented the Government to sign and promote activities with PCA, beginning in 2014.

Many countries have the intention to set up PCA offices in their countries, but haven’t got the nod from PCA. This shows the success Vietnam obtained when promoting cooperation activities with PCA. Also, it shows Vietnam’s increasingly important role and position in the international community.

The opening of a PCA office in Hanoi also marks an important step forward in Vietnam’s integration with the world and its attitudes towards international laws.

Vietnam has signed many bilateral and multilateral trade agreements. It is now a member of CPTPP (The Comprehensive and Progressive Agreement for Trans-Pacific Partnership), EVFTA (EU-Vietnam Free Trade Agreement) and RCEP (the Regional Comprehensive Economic Partnership). There are risks of disputes among the member countries of the agreements, and PCA will serve as an important institution to solve disputes among parties.

The opening of an office by PCA in Vietnam also shows that Vietnam's position in the international arena has changed a lot, and at the same time shows Vietnam's serious attitude towards the use of international law to resolve disagreements with other countries as well as other subjects in the world.

Lecturer of the HCM City University of Law, Member of the Vietnam Bar Federation

Permanent Court of Arbitration sets up rep. office in Vietnam

Five years of PCA's ruling: no such thing as ‘power creating justice’

The Permanent Court of Arbitration (PCA)'s ruling has been an irrevocable part of history. It will act as a “guide” for countries involved in the struggle for an order based on rules and not on “force creating justice.”