The politician who goes to wholesale market, wades in water to visit people 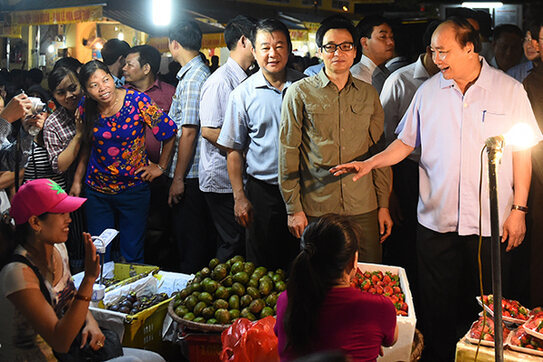 In the last five years, the achievements created by Mr. Phuc and the Government with innovation, dynamism and strong determination to implement tasks have helped the "Vietnamese vessel fulfill a journey full of storms of difficulties and challenges".

Burdened with heavy responsibility, how will the Prime Minister steer the government vessel? This was the question raised by many people when Phuc took office, warning that this would be a very difficult tenure for the Government and Prime Minister Phuc.

However, the concern was lifted after the first Government regular meeting. The Prime Minister decided that the Government has to shift from one that gives administrative orders to a "tectonic" Government that serves people. He also showed strong determination to build an upright, transparent and effective Government which says no to corruption, wrongdoings and lavishment.

Just within one month, the Prime Minister left an imprint wherever he set foot. On April 17, he was present in Quang Tri. On April 22, he came to Lai Chau and on April 24, he was in Quang Nam. He attended investment and tourism promotion conferences and groundbreaking ceremonies to kick off large projects.

One week later, he flew to HCM City on April 29 and came to Dong Nai on April 30, where he presided over an online conference with 500 businesses and dialogue with 3,000 workers.

On May 1, he visited Ha Tinh to have an urgent working session with the provincial people’s committees of the central region on the sea environment disaster.

As National Assembly Deputies commented, the Government of the last tenure was one with a passion to build a powerful Vietnam with the image of a motivated and dynamic Prime Minister.

“Though the way ahead is still full of difficulties and challenges, we believe that Vietnam will soon become a higher average income country and join the group of developed countries with high income by 2045,” Phuc said.

However, he admitted that many problems still exist. There are still many issues of public concern. Some state officers are indifferent and insensitive to people’s problems. They are indecisive and not determined in dealing with issues. They don’t do what they promise and hesitate to collide with others, so wrongdoings are not condemned.

The Prime Minister close to people

Being close to people, Prime Minister Nguyen Xuan Phuc has left good impressions among the people and social circles.

At the first glimmer of daylight one day in September 2016, the petty merchants at a big wholesale market in Hanoi were surprised when Prime Minister Nguyen Xuan Phuc and a group of officials came to the market to survey the situation.

Visiting stalls at the market and talking to merchants, the Prime Minister told them to maintain their business ethics and not trade fruits soaked in toxic preservatives which may harm consumers’ health.

In October 2016, prior to the working session with HCM City’s leaders, the Prime Minister took an inspection tour to a catering company and examined supermarkets’ food trade.

He even examined the broth at a street pho shop. The street pho shop on Nguyen Hau street in Tan Phu district once received a special guest – Prime Minister Nguyen Xuan Phuc and the Government members.

He checked every bowl at the shop carefully to find if the bowls were clean enough. He asked the shop owner how to cook pho and invited all the officers escorting him to eat pho. The owner and everyone else was surprised when the Prime Minister stood up and paid for the pho and coffee for all members.

During his Prime Minister tenure, Phuc has held three dialogues with farmers, three with factory workers, one with youth, and one with young entrepreneurs.

The people in the areas usually hit by natural disasters have become familiar with the image of the Prime Minister, wearing a soldier’s hat, going to the center of the floods to give his regards and encourage local people.

In the 2020 flood season, many online meetings were organized urgently, and many instructions and letters of encouragement were released to help local authorities and people overcome natural disasters.

“Suffering from floods and storms, one after another, we need to keep an iron will and be optimistic,” Phuc said when visiting people in Hien Ninh Commune in Quang Binh province, the most seriously flooded area.

The Prime Minister’s inspection tours showed his passion to bring "peace and warmth" to people.

The actions taken by the head of the Government received strong support from people. They were touched by the Prime Minister’s visits and sincere concern for them.