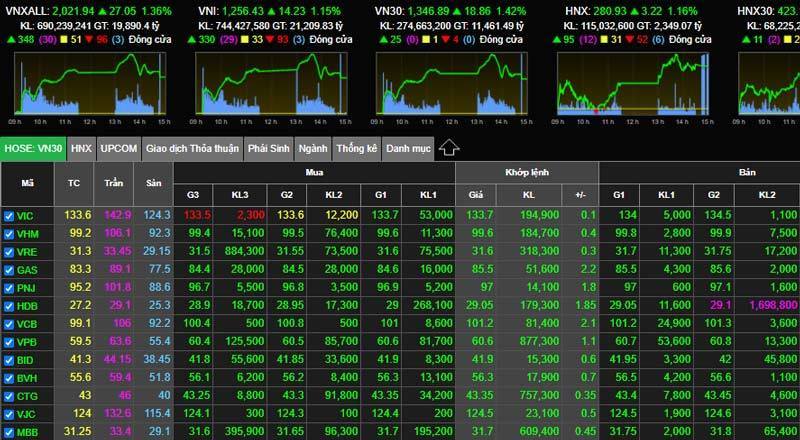 The sharp increase reflected the general uptrend of steel stocks, when the domestic and international steel prices were soaring.

The prices of bank, securities and real estate shares are also soaring.

TCB of Techcombank owned by billionaire Ho Hung Anh has seen the price reaching a historic peak of VND50,800 per share, while VPB of VP Bank was traded at VND67,800 per share on May 21, which was 2.5 times higher than six months ago.

The price of VCI of Ban Viet Securities, owned by the well-known businesswoman Nguyen Thanh Phuong, has nearly doubled to VND74,000 per share, while SSI of Nguyen Duy Hung’s Saigon Securities Incorporated has reached a new peak of VND39,000 per share.

Analysts note that while a lot of mid- and small-cap stocks have turned down under profit-taking pressure, blue chips continued their upward trend.

Among real estate shares, Novaland’s shares are now at the unprecedented peak of VND140,000 per share after days of increases.

MSN of billionaire Nguyen Dang Quang’s Masan Group made a new record of VND113,000 per share after it announced a series of big deals.

While the VN Index hovers around the 1,280 point threshold, the VN30 Index, which shows performance of the 30 largest stocks, has surpassed the 1,400 point threshold, a 30 percent increase compared with early this year.

According to Vietstock, the fact that the VN30 Index is forming the White Marubozu candlestick pattern after a period of going flat shows that buyers are at an advantage.

The trading volume is higher than previous days and higher than the 20-session average level, which shows an abundant cash flow.

Bank, steel, real estate and retail shares have made great contributions to the VN Index.

Steel shares, including HPG, have been hunted by investors thanks to the good business performance of steel manufacturers. Hoa Phat, for example, reported high post-tax profit of VND7 trillion in Q1, a 200 percent growth rate compared with the same period last year.

The major driving force of Hoa Phat is the skyrocketing steel price, including HRC and structural steel. Hoa Phat can be self-reliant on iron ore.

The short steel supply in the context of high demand thanks to economic stimulus packages all over the world is the reason behind the sharp price rise. Steel demand is extremely high in China in the post-pandemic and economic recovery period.

Long’s son, Tran Vu Minh, registered to buy 5 million HPG shares from May 21 to June 18. If succeeding, Minh would have to spend VND320 billion to increase his amount of shares to 53 million, or 1.6 percent of Hoa Phat shares.

Many large corporations have made breakthrough steps in their business, which helped bluechip prices increase sharply.

Masan Group has revealed a plan to bring The CrownX into the bourse after integrating its consumer goods manufacturing and meat processing into the VinCommerce network.

Masan has made huge capital increases, including the sale of 5.5 percent of The CrownX to Alibaba group of investors for $400 million. The group plans to wrap up a strategic investment deal with other investors, worth $300-400million.

VIC shares of dollar billionaire Pham Nhat Vuong’s Vingroup hit a new peak recently, having capitalization value equal to that of many banks combined, following the news about VinFast’s IPO plan in the US.

The IPO is expected to bring $2-3 billion and the brand may have the value of $50 billion at minimum after listing.

Vingroup has issued $500 million of international bonds with the option to receive Vinhomes shares (VHM) at VND123,000 per share.

In the real estate sector, Novaland (NVL) has announced its total project development value of $45 billion. With three key projects, NVL plans to make a profit of $2 billion in 2021-2023.

Vietnam’s stock market is expected to continue to grow, helped by strong economic growth and increasing local liquidity. The positive outlook will attract foreign investors back to the market, according to HSBC.