At the seminar, former Deputy Prime Minister Vu Khoan recalled the country's achievements in the past 75 years and pointed out four miracles.

First: Vietnam was the first country in the colonial world to rise up, taking its own strength to regain national sovereignty, establishing the People's Democratic State.

Second: As a small and weak country, Vietnam repelled all foreign invaders to maintain independence and unification.

Third: From an unnamed country on the world map, Vietnam now has its name on the list of active and responsible members in the international community.

Fourth: From a country that was not named on the world map, Vietnam has become a country with extensive foreign relations, a very high international position, and a bright spot in today's world.

The former Deputy Prime Minister emphasized that Vietnam’s diplomacy - founded by President Ho Chi Minh who was also the first Foreign Minister of Vietnam - has made great contributions to these historical period and learned a lot of valuable lessons.

Regarding these lessons, Mr. Vu Khoan said the first is to persist in basic goals that reflect the close interests of the nation, in line with the trend of the times. When signing important international treaties such as the 1954 Geneva Agreement and the 1973 Paris Agreement, although the goal of national unification was not immediately met, Vietnamese diplomats persisted asking the opponents to recognize Vietnam’s independence, sovereignty, unity and territorial integrity in written form. In peacetime, these objectives are an important foundation to create a stable environment for national development.

Another lesson, Mr. Khoan said, is related to the arrangement of forces to achieve the goal, in which the most important factor is to have real strength. The "strength" includes both "hard power" (economic and defense strength) and "soft power" such as strong traditions, solidarity, human qualities, and Vietnamese’s open personality.

The next lesson, according to the former Deputy Prime Minister, is the skillful application of appropriate policies.

At the seminar, former Deputy Prime Minister - Foreign Minister Nguyen Manh Cam recalled the time when the Democratic Republic of Vietnam was formed.

At that time, by the policy of independence and self-control, in solitary conditions, Vietnam implemented the policy of detente with Chiang Kai-shek soldiers to cope with the French colonialists, and then a policy of détente with France to cast the Chiang Kai-shek soldiers out. Then Vietnam signed the Treaty on March 6, 1946 with France and then the Provisional Treaty on September 14, 1946. Signing these two documents not only gave Vietnam the necessary time to strengthen the capacity, but also affirmed the international legal position of the Democratic Republic of Vietnam.

Mr. Cam recalled President Ho Chi Minh’s visit to France and some countries on the way to France as the way to not only let the world know about a country that won its independence, but also to lay a solid basis for taking advantage of the support of the French people and the colonial countries of France towards Vietnam’s later resistance against French colonialism.

Mr. Cam mentioned the diplomatic role in the war against the US. He emphasized that diplomacy initially reflected victory on the battlefield, but later diplomacy coordinated with the military and the political fronts to win victory. And finally, diplomacy became an important battle with strategic significance.

The veteran diplomat mentioned a letter written by President Ho Chi Minh in early 1966 to the heads of many countries around the world. The letter clarified the peaceful stance of the Vietnamese people, which is true peace, on the basis of independence and true freedom.

“Mr. Thach was very interested in research and very sensitive to the new. To focus on research, he set up a 'funnel' in the leadership of the Ministry - assigning a deputy minister in charge of handling all daily tasks so that other ministry leaders could focus on research,” he said.

“This model was adjusted later as the 'funnel' was overloaded, but the issue of strategic research, particularly the change of mindset in foreign affairs, was still a focus. Thanks to these efforts, the diplomatic sector has actively contributed to the handling of important international issues,” Mr. Nien said. 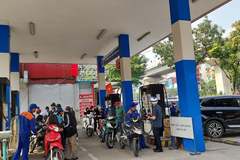