Fifty per cent of Vietnamese researched online prior to purchasing Financial Services offline, according to the latest report from Google, Temasek, and Bain & Company.

While Financial Services continue to be primarily purchased offline, the influence of online research is growing.

The report attributed the upturn to the surge in online users in the region, which is estimated to be around 360 million currently - an increase of 100 million since 2015.

The internet economies of Malaysia, the Philippines, Singapore, and Thailand are growing between 20 and 30 per cent annually, but the two pacesetters in the region are Indonesia and Vietnam, with growth rates in excess of 40 per cent a year. 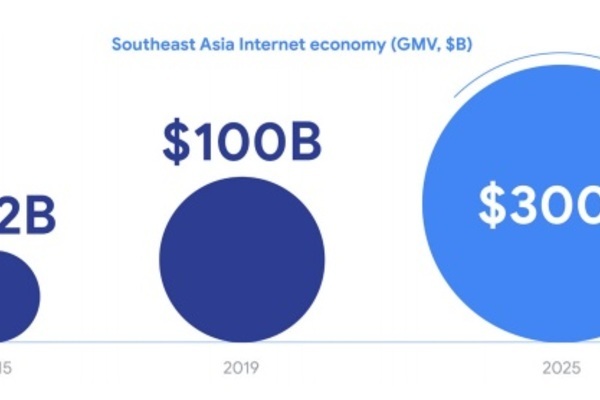 This surge across Southeast Asia is attributed to an influx of new online users in the region, with about 100 million more than four years ago. This growing market of customers has incentivized businesses in the region, from established “unicorns” to small and medium-sized enterprises (SMEs), to adopt and leverage digital tools to expand rapidly.

As the world’s most engaged internet users, Southeast Asia is shaping technology trends in its own way. When it comes to services like Ride Hailing and Food Delivery, the region is rapidly growing and the momentum is only going to continue as a new generation comes of age and people outside big cities come online. By 2025, the regional internet economy will have tripled to $300 billion.

Here are some key insights from this year’s report. 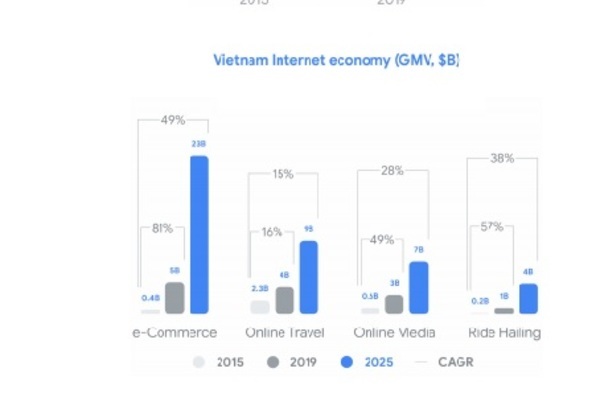 Southeast Asia’s internet sectors are booming and this is indicative of the fundamental changes in the way people shop, eat, and get around. E-commerce is the biggest and fastest-growing sector. More than 150 million Southeast Asians are now buying what they need online and the sector is valued at $38 billion today compared with just $5.5 billion in 2015, and is on track to hit $150 billion by 2025.

Ride Hailing is surging, with 40 million people ordering transport, food, and other services on demand, compared with just 8 million in 2015.

As the ecosystem matures, internet economy companies are switching their focus from acquiring new customers to driving higher engagement with existing users. To do so, they are offering a variety of products and expanding into new services including gamified promotions, enticing streaming content, live news, and more. Consumers are benefiting from these trends, as they have access to more choices and lower prices.

Opportunity is spreading beyond the big cities

Technology has made Financial Services more accessible to users in the region, and it is projected to expand further to reach out to 100 million Southeast Asians with limited access to financial services today. Digital Payments is set to grow from $600 billion in 2019 to more than $1 trillion by 2025, accounting for almost one in every two dollars spent in the region.

Global economic growth has slowed in 2019, with the outlook remaining cloudy. But even as global tech funding takes a hit, Southeast Asia has remained a bright spot. Funding flows into the region continued to grow at a healthy pace, from the high base of a record-breaking 2018. The first six months of 2019 saw internet firms raise $7.6 billion; about 7 per cent more than in the same period in 2018. A growing cadre of “aspiring unicorns” has emerged and they are on the lookout for late-stage funding to scale further.

Ecosystem challenges are being resolved

Experts said that Southeast Asia has made progress in overcoming the initial challenges of the internet economy by making internet access more affordable and strengthening consumers’ trust in digital services. However, talent constraints remain a pressing concern, as companies look for skilled workers to take on the influx of new roles created in the digital economy.

“Southeast Asia has an incredibly exciting digital economy, as consumers are turning to digital to complete millions of tasks daily, resulting in unprecedented growth. However, there’s more to be done to realize digital’s incredible potential. Whether it’s providing support for small businesses to grow, teaching Southeast Asians digital skills, expanding internet access to more people, or advocating for smart policy and regulation, we’re looking forward to helping bring the benefits of technology to millions more people across this dynamic region.”

“Mobile technology is changing the way Southeast Asians work and live, providing them with greater access to new opportunities and markets. This trend is creating attractive investible opportunities in Southeast Asia’s internet economy. These opportunities tap into structural trends that are being driven by transformational technologies and changing consumption patterns. Together with businesses, governments, and communities, we are committed to helping create a better, smarter, and more sustainable Southeast Asia.”

“Southeast Asia’s digital financial services are growing rapidly, with digital payments already at an inflection point and expected to exceed $1 trillion in gross transaction value by 2025. Digital financial services offer the biggest opportunity for serving the underbanked - nearly 100 million adults in the region with limited access to financial services - by lowering costs and bridging gaps in data availability. This segment will be the main battleground for most players, with consumer technology platforms well-positioned to serve their needs given their large and engaged user base.” VN Economic Times