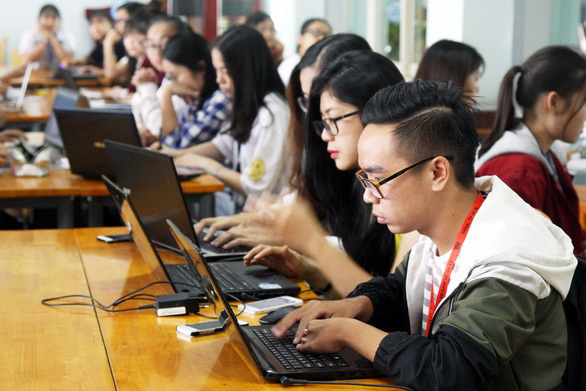 For HCMC Open University, 2006 marked a milestone in the school’s digital transformation, when it began organizing credit-based study, allowing students to register for subjects online. The management of classes, study schedules, timetables and student information was updated into a general information system.

Digital transformation began at Van Lang University in 2008, when it cooperated with Carnegie Mellon University. At that time, lecturers had to use a module system to upload documents and exchange information with students.

However, Tran Thi My Dieu, Vang Lang University Rector, said she still dared not give answers to questions whether Van Lang was really a digital school.

“It was just digitizing what can be digitized. In this period, everything was digitized to be managed in the system. Everyone can connect each other, online or offline,” Dieu explained.

The HCMC University of Technology and Education started its digital transformation in 2013, when it received a learning management system (LMS) from ASU (Arizona State University) in the US.

At that time, only 17 ‘nucleus’ lecturers of the school were trained by ASU experts. Now, it has 91 million learning interactions on the school’s digital teaching platform each year.

UTEx is the first state-owned online university in Vietnam. Equipped with modern facilities, it uses an ecosystem of management software such as KPIs, E-Portfolio and Dashboard.

Twenty years ago, digital education was still a vague concept, but now it is a clear trend.

Pham Quang Dung from the Vietnam National University of Agriculture estimates that the cost for one school to shift to a smart school model is 60 percent higher than a traditional school. Money is spent mostly on hardware, software, technology, smart classrooms, pedagogical activities, student management, lecturers and smart teaching programs.

Dung hopes that commercialization of research works during the transformation process will bring money for reinvestment. It is expected that investment capital can be recovered within 10 years.

According to Dieu, human resources are the key factor for digital transformation. Making investment in human resources means providing an environment for lecturers to prepare lesson plans online but also helping them upgrade their teaching methods and improve their capability.

“If we have a strong platform worth multi-billions of dong and a good connection system but our staff remains unchanged, we won’t be able to become a smart university,” she said.

The most difficult issue is to encourage the large community of lecturers to be aware of the need for innovation to reach a better future with more optimal solutions.