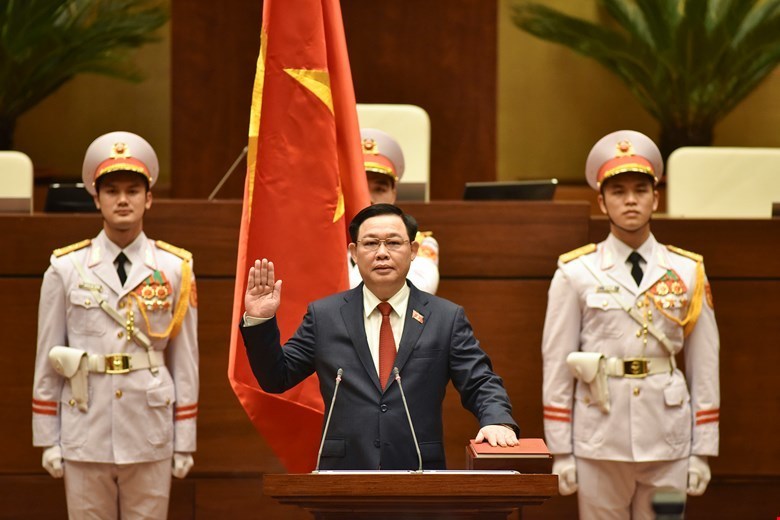 On March 31, Hue was elected as chair by the National Assembly (NA). Before taking the new position, he spent one year on the ‘hot seat’ as Hanoi Party Committee Secretary.

The first big challenge for Hue, which came just one month after taking office as the secretary, was the discovery of the first Covid-19 patient in Hanoi on Truc Bach Street in Ba Dinh district on March 6, 2020.

Hue then gathered an urgent meeting at midnight to discuss and give instructions on measures to zone, isolate and trace the virus at lightening speed.

According to Hue, with the Covid-19 pandemic, a small mistake would have been enough to paralyze Hanoi. Therefore, the city’s leaders strictly followed the principle ‘fighting the pandemic is like fighting enemies’.

“On March 6, 2020, when the first Covid-19 patient was discovered in Hanoi (Patient No 17), opinions varied on whether to gather meetings immediately. But we decided that a meeting must be organized at once, at night. The situation was obviously serious, because the patient was in Ba Dinh district, the center of the city,” Hue recalled.

Hanoi was able to control the situation quickly after isolating Truc Bach Street soon and finding the list of passengers on the same flight as Patient No 17.

“If we had taken action one or two hours late, we could not have imagined how serious the consequences would have been,” Hue told the press.

The Hanoi Party Committee then told agencies at different levels to fight the pandemic but not apply extreme measures to block trade. Economic sectors were asked to adapt to the new conditions, while agencies were asked to use the social distancing time to settle administrative procedure problems and create favorable conditions for people and enterprises to continue production and business.

Few people know that at No 9 Ngo Quyen Street, the head office of the Hanoi Party Committee, under the chairmanship of Hue, the Party Committee Secretary, the meetings of the standing committee were always "hot" with discussions about economic growth scenarios and socio-economic development management amid the pandemic.

Many meetings lasted until 11 pm.

Another lasting impression made by Hue and Hanoi’s leaders was the settling of serious problems that had existed for many years. One of them involved violations related to construction work at No 8B Le Truc street in Ba Dinh district.

Hue said at a meeting that the owner of the construction work had contacted him many times and asked for a meeting to give a presentation about the project.

“I agreed to meet him and spent four hours talking to him. I told him that this was the only meeting, after which the municipal authorities would deal with the violations,” he said.

Illegally built floors of the building were then demolished.

Hue scheduled a fact-finding trip to the area. He said that local people in the waste treatment area had sacrificed their personal interests for the city’s development, and now the city had to share difficulties with people with a high sense of responsibility and initiative.

He asked for a check and re-organizing of the process of collecting, carrying and treating waste. He said that if the heads of the waste treatment units showed signs of seeking profits illegally and affecting people’s life, they would be considered as both administrative and criminal cases.

“In many cases, if Hanoi authorities don’t deal with problems immediately, this won’t be able to satisfy the requirements for the city’s development,” he said.

Holding the post of Party Committee Secretary for over one year, Hue paid working visits to 30 districts, towns and agencies.

When holding the post of Minister of Finance, Hue also left an impression about his approach to price control of essential goods.

“The solution is transparency and publicity,” Hue said before the second session of the 13th NA.

Minister Hue was famously quoted once as saying at a workshop on petrol prices: “We regulate petrol prices with our responsibility for more than 90 million people, not for the benefit of any group of people or enterprise. The State doesn’t threaten anyone and no one can threaten the State."

During his four years as Deputy PM, Hue was assigned to help the PM to supervise and give instructions in fields related to planning, finance, price control, and banking and monetary policies.

Hue made an important contribution to the Government’s success in curbing inflation, with the CPI increase always lower than the ceiling rates set by NA.

Vuong Dinh Hue, Politburo member and Secretary of the Hanoi Party Committee, was elected as Chairman of the National Assembly (NA) and the National Election Council (NEC) at the 11th sitting of the 14th legislature on March 31 morning.