Explaining the low post-tax profit in the first half of the year, Vietnam Airlines said total revenue and other income of the holding company decreased by 67 percent compared with the same period last year by VND18.012 trillion. 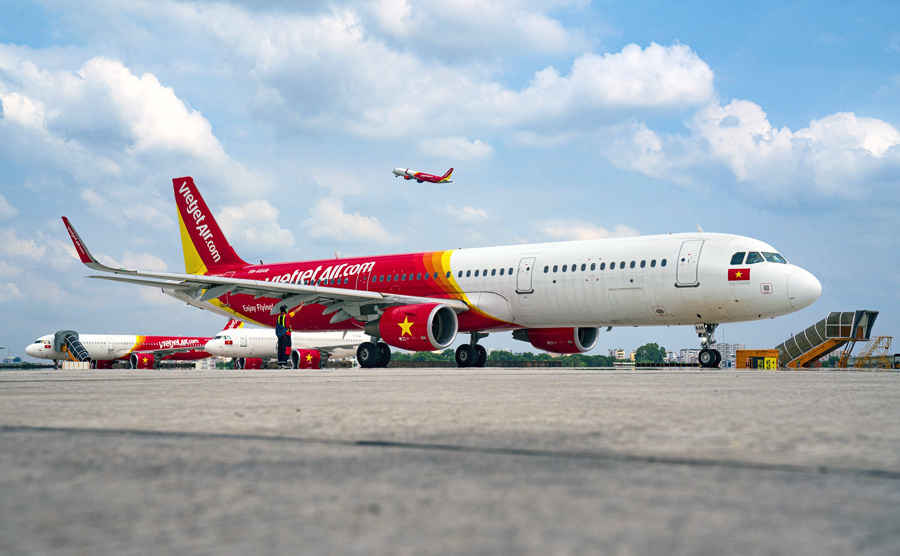 The revenue from service provisions dropped sharply by 50 percent, or VND18.296 trillion (revenue from domestic passengers decreased by 43.5 percent, international passengers 63.1 percent and from chartered flights by 67 percent).

The total costs of the holding company in H1 decreased by 30 percent (VND10.845 trillion). As the decrease in revenue was higher than the cost reduction, the post-tax profit of the national flag air carrier dropped sharply.

Meanwhile, Vietjet Air (VJA) reported net revenue of VND10.97 trillion from sales and service provisions in H1, a decrease of 55 percent compared with the same period last year, and a loss of VND1.44 trillion from air transport operations.

This was the first time that VJC had taken a loss from air transport operations since December 2011.

The air carrier has transferred financial investment projects accumulated for many years to offset cash flow reduction and maintain its core business – aviation.

After COVID-19 broke out in Da Nang and some localities, people restricted travel, and domestic flights have entered the low season.

Vietnam Airlines, which had 500 flights a day, is now providing 200-300 flights daily. The revenue from international flights accounts for 50 percent of total revenue of Vietnam Airlines and VJA, the two largest air carriers, but most flights have been frozen because of Covid-19.

The government has recently restored commercial air routes to some countries which have controlled the epidemic well, including China, South Korea and Japan.

However, the number of flights remains modest and the passengers are not normal travelers. Domestic airlines with 30,000 workers still have to cope with difficulties.

Economists said the 2-2.5 percent growth rate will increase GDP by 1 percent. The figure shows the importance of aviation to the national economy.

Governments around the world have provided bailouts worth $100 billion, or 25 percent of total losses, to rescue airlines.

According to Luong Hoai Nam, an aviation expert, support has been provided through three major packages.

The first is a credit policy which helps airlines pay salaries to workers, retaining jobs and minimizing layoffs.

The Aviation Business Association has proposed that the government provide a medium- and long-term support package, offering preferential loans to all airlines, no matter if they are state owned or privately run. The package would be worth VND25-27 trillion, or $1.2-1.3 billion.

Nam said the rescue needs to be provided as soon as possible. The package is estimated to be equal to one-third or one-fourth of the losses airlines have incurred because of Covid-19.

“This support package should be done early so that capital can reach businesses before they can no longer handle any outbreak,” he said.

The tax and fee cuts will help airlines cut operation costs. In fact, some measures have been taken, but the validity period is too short, just 5-6 months, which will only save several hundreds of billion of dong. And they still are awaiting guidelines to be implemented.

Nam suggested extending the validity time of the package to 18-24 months, which would help airlines save VND5-7 trillion.

Nam stressed that airlines must be treated equally and that it is necessary to create healthy competition.

He also suggested that the state invest in private airlines. The German government has invested in Lufthansa, while Thai Airways has received investment from non-state sources, though it is a state-owned airline.