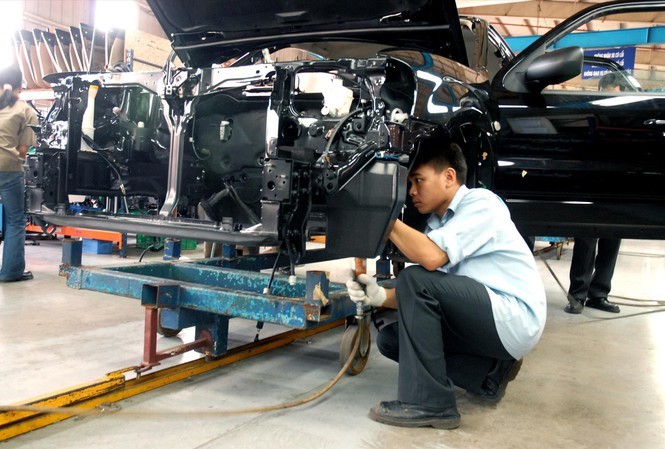 Reports from the General Department of Customs (GDC) and Ministry of Industry and Trade (MOIT) show that Vietnam’s import and export turnover has reached $403 billion by October 15, an increase of $30.2 billion over the same period last year. The export increase has led to a trade surplus increase to $6.83 billion.

The country’s export turnover hit $204.9 billion, and import turnover $198.1 billion. More than 63 percent of import and export value, or $255 billion, was from foreign invested enterprises (FIEs).

Of this, the foreign invested sector had export value of $140.3 billion, up by 4.8 percent compared with the same period last year, which amounted to 68.5 percent of total export turnover. The trade surplus in goods of the economic sector hit $25.4 billion.

As of the end of September, export turnover of 28 product items with export value of over $1 billion had accounted for 90.9 percent of total export value of the country. And FIEs made great contributions to the results.

Reports show that the export items with export value of $1 billion and higher include hi-tech products such as smartphones, computers, cameras and equipment. Most of the products are exported by FIEs, while Vietnamese enterprises play an insignificant role in the export of the products.

Vietnamese enterprises are believed to have advantages in some traditional products such as textiles and garments, and footwear. However, FIEs have also shown their competitiveness in the fields. Footwear exports by FIEs at times accounted for 80 percent of total exports of the industry.

Even in agriculture, the export turnover of seafood, coffee, vegetables and fruits, and pepper from the foreign invested economic sector also increased sharply in recent months with export turnover of hundreds of millions of dollars for each category of products.

Experts warn that exports by FIEs now account for a high proportion of Vietnam’s total exports, and that this shows Vietnam has been relying on the foreign invested sector.

“Vietnam’s trade status – surplus or deficit – totally depends on FIEs. The country has been enjoying a trade surplus for the last four years due to FIEs. Vietnamese enterprises still import more than export and their export value in many fields is low compared with FIEs,” said a high ranking official from MOIT.

Temporary suspension of import and re-export of plywood to US

The Ministry of Industry and Trade (MoIT) has decided to suspend the import of plywood products to Vietnam for re-export to the US to prevent commercial fraud on goods' origin and illegal transshipment.