The new Vietnamese passports with a navy blue cover, issued from the beginning of July 1, 2022, do not contain information of the place of birth of the passport holder (province/city), “which is a requirement for personal identification and also for processing of Finnish visa/residence permit applications,” the Embassy of Finland in Hanoi said in a statement.

“The Embassy of Finland will not receive applications for visa/residence permit of holders of the new passport until further notice from competent authorities of Finland. The Embassy will provide information in case of any changes,” the announcement continued.

Finland will actively work with member states of EU, Schengen and Vietnam to find solutions for the matter, the embassy noted.

Earlier in July, Germany and the Czech Republic also took issues with the omission of place of birth on the new passports, saying that would make it difficult for immigration authorities to properly verify the identity of the passport holders.

The UK and France however expressly stated that they would continue to accept Vietnam’s new passports.

Spain, after an initial rejection, also accepted the new passports, but required visa applicants to present their valid Vietnamese identity card (which has place of birth information). The embassy warned that this visa will not allow entry into Schengen countries which don't accept the passports however.

The Ministry of Public Security, while insisting that the new passports comply with International Civil Aviation Organisation (ICAO) technical standards, has relented by saying it would add the field for place of birth in the appendix of the passport for those who request it.

In the long term, the ministry could revise the design of the passport and add the place of birth on the main page. 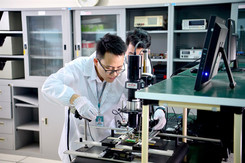