The first Game Fishing Association Championships will be organised from May 17 to 18 at the Trang An Fishing Club in Ha Noi. 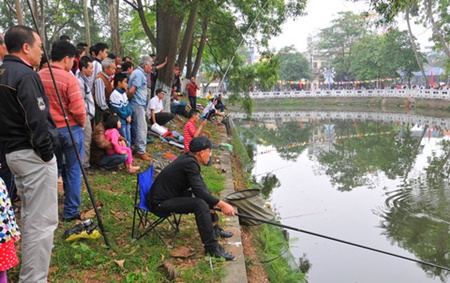 The first Game Fishing Association Championships will be organised from May 17 to 18 at the Trang An Fishing Club in Ha Noi.

More than 100 athletes from 20 teams have registered to take part in the singles and team events.

According to Nghiem Ba Vuong, the association's general secretary, Ha Noi, HCM City, Hai Phong and Thanh Hoa are sending the strongest contingents, among others.

He said the successful competitors will receive bonus points to upgrade their national ranking.

Fishing, as a sport, began in Viet Nam in 1995 and grew popular mainly in the southern provinces, with HCM City's 9999 being the first club to be established in 2002.

Over the years, the sport has attracted many athletes. Its increasing popularity led to the establishment of the Viet Nam Game Fishing Association last October.

Vuong said the tournament would be held as an annual event after making its debut this year, and hoped that in the future it would become popular among the people.

From May 12 to 22, the Vietnamese national archery team is visiting the Republic of Korea (RoK) for a training course sponsored by Doosan Heavy Industries Vietnam Co Ltd (Doosan Vina).

Doosan Vina’s support for the training of the eight Vietnamese archers and three coaches in Chang Won city a part of a six-year programme aiming to economically support Vietnamese fulfil their archery dreams and benefit from training of professional coaches from the RoK.

During the training course, the team will participate in the RoK’s 48th national archery tournament to be held in Cheong Ju city.

The training is being provided pursuant to a cooperation agreement between Doosan Vina and Vietnam’s General Department of Sports and Physical Training, which was signed in November, 2013.

Nguyen Ngoc Truong Son and his girlfriend Pham Le Thao Nguyen, both won gold medals of the National Rapid Chess Championships in HCM City on May 15.

In the women's category, Nguyen dominated with 9.5 points after 11 matches. Her teammate Pham Bich Ngoc took the silver and HCM City's Nguyen Thi Thanh An bagged the bronze.

After the Rapid, the masters will continue with the National Blitz Chess Championships, in which world champion Liem will defend his title.

The tournament will end on May 17.

Jeon Ga-eul scored four goals, Park Eun-sun scored a hattrick, Ji So-yun and captain Cho So-huyn scored two goals each and Kwon Hah Nul scored one goal as the South Koreans recorded a victory of the largest margin at the tournament so far.

The score was 7-0 at half time, including two penalties. South Korea were awarded another penalty in the second half.

On the other side, contrary to expectations from a fighting team, Myanmar barely had any clear-cut chances despite taking efforts to ambush the South Koreans in the opening minutes of each half.

"Scoring goals against Myanmar in the opening minutes is not important to our game. The key aspect of the first half is to observe how the player are and keep them in good condition," South Korea's coach, Yoon Duk-yeok, remarked at the post-match press conference.

South Korea will play Thailand tomorrow at the same venue and are expected to win again.

"None of the games is more important than the other game. We tried our best in every single game. How well you prepare and how well you take rest will have an influence on how you can win a title," Yoon pointed out.

Yoshinori Kumada, Myanmar's coach, admitted the defeat and stated the final score will say it all.

"It was a very tough match today. We had planned a strategy for the game but everything was going against us, and the weather condition was also quite stifling," the Japanese added.

Myanmar will next play China, who beat Thailand 7-0 in the later game of the day.

Today, in Group A's second round matches, Viet Nam, who temporarily led the group after the opening 3-1 win over Jordan, will take on World Cup winners Japan while defending champions Australia will face Jordan.