Ho Chi Minh City has been chosen as the first locality to carry out studies on the e-transportation development plan, given its huge potential.

The information was announced during a recent meeting of the municipal Department of Transport and consulting units, which was to study a transportation development plan involving e-vehicles in the southern hub.

Prof. Dr Le Anh Tuan of the Hanoi University of Science and Technology, who is also head of the consulting units, said HCM City’s land used for transportation stands at only 12.2 percent, and transport infrastructure development rate remains modest.

Meanwhile, the number of vehicles has been on the rise, causing severe environmental pollution.

In addition to switching to e-vehicles, the city is advised to opt for waterway and railway transport and bolster electrification.

Tuan underlined that electricity infrastructure has an important role to play in the implementation of the e-transportation development plan.

As HCM City is the first ever locality to roll out the plan, it must be a priority in the national electric distribution planning, he stressed.

Speaking to Thanh Nien (Young people) newspaper on the sidelines of the event, Deputy Director of the municipal Transport Department Bui Hoa An said that HCM City is set to launch a new electric bus route by the end of the first quarter, with an aim to mitigate environmental pollution and improve passengers’ experience.

The e-transportation development plan requires concerted efforts in infrastructure development, he said, adding that the Transport Department will continue to join hands with consulting units in building mechanisms and a master plan for the project./. 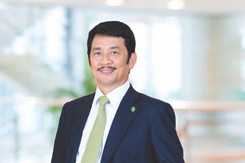