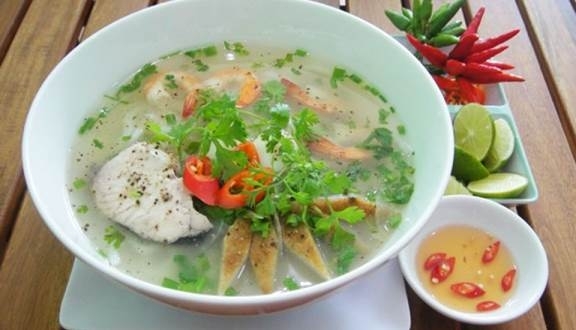 While the noodles in Saigon are thick and chewy and appear white to almost transparent, the noodles in Phan Rang Town are thinner and have a milky white color. They are made from rice powder and boiled in hot water.

The attractiveness of the dish lies in the broth, for which most restaurants seem to have the same recipe. The fish, mainly silver fish, are carefully selected from the market in the morning, and the chef separates the flesh from the bones. The flesh is used to make cakes while the bones are stewed along with pork bones to make the broth flavourful.

To make the fish cakes, the chef seasons the fish and kneads until smooth. Many restaurants have switched to machines to save time. The fish cakes are fried until golden and put on top of the noodles followed by the broth.

To keep the noodles from sticking to each other, the chef puts them in hot water for a few seconds before serving. A bowl consists of noodles, fish cakes, cilantro, green onion, and black pepper. The dish is served hot and presented in an eye-catching manner.

To enjoy, don't forget to add some chili sauce and lemon slices. The softness and chewiness of the noodles is like no other.