Fisherman catches a seal, asking for money from authorities

VietNamNet Bridge - After discovering a 30kg seal in his fishing nets, about 3 km from Da Nang’s shore, a fisherman asked the local authorities for VND3 million ($150) of compensation for the torn net and for bringing the animal to shore.

VietNamNet Bridge - After discovering a 30kg seal in his fishing nets, about 3 km from Da Nang’s shore, a fisherman asked the local authorities for VND3 million ($150) of compensation for the torn net and for bringing the animal to shore.

On the morning of August 19, Mr. Ung Van Thuan, a fisherman in Hoa Khe Ward, Thanh Khe District, Da Nang city found out that his nets were torn while catching fish offshore. Following the track, Thuan saw a seal of about 30kg in weight, 1m long in his nets and was eating fish.

After taking the seal on shore, he brought the animal to the sand for curious people to come see. But fearing that the seal might die, he later tied the animal’s hind legs and locked it in a bamboo cage and dropped the cage in the water.

One person offered VND3.5 million to buy the seal but Thuan decided not to sell it, but to wait for the authorities.

The representatives of the Border Guard and the Fisheries Department of Da Nang encouraged Thuan to release the seal back to the ocean but he disagreed.

"The seals damaged my nets and ate my fish. Now if I release it into the sea, the authorities have to compensate for my torn nets and remuneration to me," Thuan said.

Mr. Duong Hien Dong, a senior official from the Da Nang Fisheries Department said that in accordance with the law, people who catch rare animals must voluntarily hand over the to the authorities to release them into the wild. 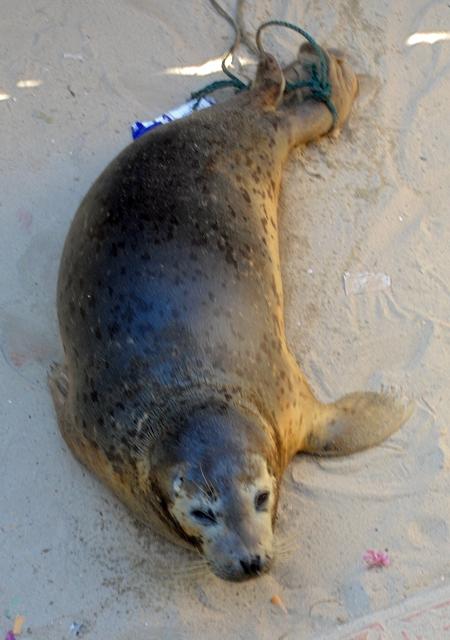 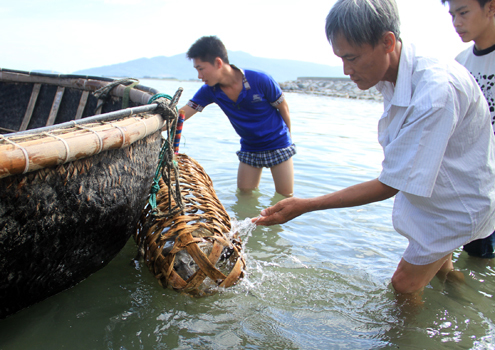 At 9.30am on Monday, August 19, Thuan did not release the seal yet. He claimed VND3 million ($150). Approximately one hour later, he agreed to release the animal, after being told that the arrest of a seal - a rare animal – is a violation of the law.

Local agencies released the seal about 30km from shore the same day.

After putting the seal in a big bucket full of water, he handed the animal to the border guard authorities and release the seal back to the ocean although the seal damaged his net.

Xu was then rewarded by the Da Nang Department of Agriculture and Rural Development for releasing a rare animal to the wild.