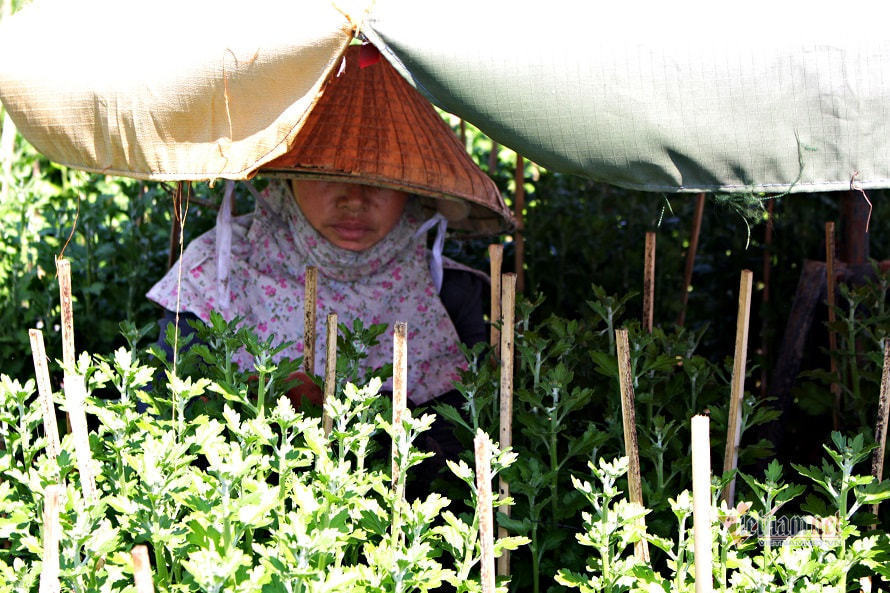 In the middle of marigold beds, Trinh Thi Kim Lan, 47, in district 12, in HCM City was quickly pruning off branches under the hot sun. Lan said this year’s quality of flowers is good with beautiful flowers.

Thoi An flower village is one of the major flower providers to HCM City.

However, she still is worried that the flowers may not sell. No merchant has contacted her to discuss flower collections for Tet sale season.

By the same time last year, she had sold 70-80 percent of flowers in the garden.

“In previous years, merchants had come by this time to place orders. But no one has contacted us this year, and we made heavy investments in farming,” she complained.

Lan thinks that merchants are indifferent because of Covid-19. She fears that the pandemic has prompted people to tighten their purse strings and reduce expenses on flowers.

“I have had constant anxiety about sales since the eighth month of lunar year, when I started sowing seeds. However, I have been growing flowers for 20 years and cannot give it up,” she said.

“My growing area is smaller than in previous years. The investment rate is high, but I still don’t know if flowers will sell,” she complained.

The households growing apricot flowers in Binh Loi village in Binh Chanh district are also having the same concern.

She said at this time last year, there usually are many cars queuing up to get apricot pots from her garden.

Visitors to Binh Loi apricot village may be surprised to see deserted fields next to the green apricot growing area. The owners of the fields have begun getting seeds from the flowers, preparing for incubation of seedlings for the next crop.

Hired workers also are worried because merchants have not come to collect flowers.

Doan Thi Cuc, 60, in district 12, who is working for Lan, complained that the worry about lack of sales has never been so high.

“I have never seen this situation before in my farming life. I think we have to bring flowers to market and Tet flower festivals to retail,” she complained.

In previous years, when flowers went for good prices, hired workers like Cuc had many things to do. They usually had to work until evening. But the demand for hired workers is low this year.

A woman pruning off braches in the village told reporters that garden owners don’t hire many workers. To cut costs, the owners take care of flowers themselves or use their relatives.

“In previous years, the income from the work at apricot gardens was high enough for me to spend on Tet holiday. But I don’t have many jobs this year, so this Tet will be more mediocre than the previous Tet,” she said.

Meanwhile, Lan affirmed that she still has to hire workers to take care of the gardens to be sure that flowers bloom in time and have high quality. Lan is now using six workers.

Nguyen Thi Phuong, 58, the owner of a flower garden in Thoi An, said she and her three children are taking care of flowers. But when there is too much work, she has to hire workers.

In previous years, he mostly hired local relatives and friends. But she now plans to use more people this year, especially those who have become jobless because of Covid-19.

Pham Van Nguyen, chair of the Farmers Association of Thoi An Ward, confirmed that farmers are worried that the pandemic will affect the purchasing power.

“Merchants are hesitant to place orders and store flowers,” he said. “The flower growing area has reduced by 50 percent compared with previous years."

However, farmers still hope that their flowers will sell for Tet.