The Vietnam Folk Arts Association on Friday honoured 61 outstanding folk artworks at a ceremony in Hanoi. 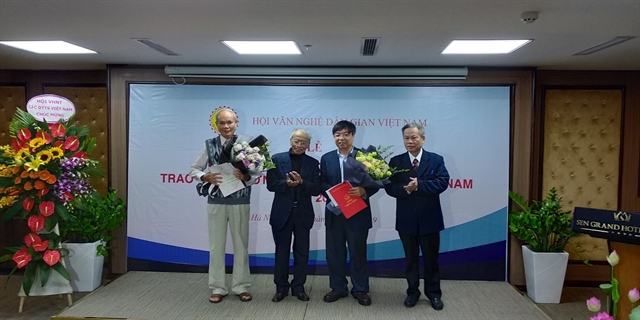 The orangiser of the annual Folk Art Awards said there were no first prizes this year, while the two second prizes A went to a study project on folk poetry by Triều Nguyên from the central province of Thừa Thiên-Huế and religious practices by a group of authors from the Cultural Research Institute, led by Dr. Chu Xuân Giao.

The organiser also awarded 12 second prizes B, 39 third prizes of A and B and five encouragment prizes to works in different areas.

Professor Tô Ngọc Thanh, chairman of the association and also the award organising board, said this year, the board received 77 entries, of which five were eliminated for violating contest rules.

Addressing the award ceremony on Friday, Thanh said among the candidates and award-winning works in 2019, besides the collections, some entries were summary studies based on the theory of systematic characteristics and the history of folk culture.

"Typical are the two works that were awarded with the Second Prizes," said Thanh.

In particular, in the work about the religious practices of Kinh people and some ethnic minorities in the northern mountainous region according to system of Tam Phủ-Tứ Phủ (Three Palace-Four Palace), the religious traditions of the region were for the first time studied based on fieldwork materials and biblical records of Vietnamese Hán Nôm culture, books written in Vietnamese-romanised script, documents by French writers and media in the early 20th century, and the traditional cultural activities of overseas Vietnamese.

Prof Thanh appreciated all the awarded works, saying that they have proved efforts of scientists and researchers as well as their contributions to highlighting the Vietnamese culture.

"Their works will be preserved as a foundation for the following generations to continue studying and developing," said Thanh. VNS