With revenue of $2.35 billion in 2018 and an annual growth rate of 25-30 percent per annum, the Vietnamese market is highly attractive to foreign brands.

$2.35 billion is the value of the Vietnamese cosmetics market estimated by Yano Institute. It is expected that the growth rate of the skincare and make-up market will be 15-20 percent in the next 10 years. 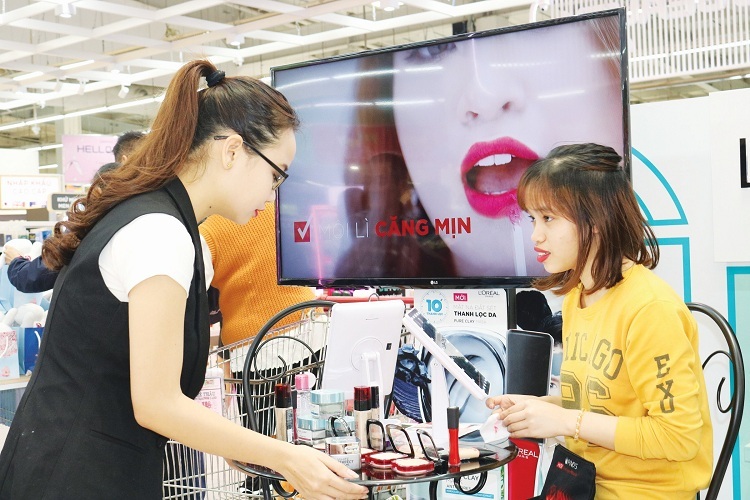 A report shows that 16.3 percent of Vietnam’s population belonged to the middle class in 2018, while the figure is expected to increase to 33 million by 2020.

The high growth rate of the industry has also conributed by the strong development of e-commerce. A survey by Q&Me found that 57 percent of make-up users bought products online and 72 percent bought via social networks.

Nguyen Manh Tan from Haravan cited a report as saying that in e-commerce, the revenue from cosmetics is just second to fashion products.

The attractiveness of the Vietnamese cosmetics market also comes from tax preferences. Vietnam is a member of many FTAs, in whuch tariffs have been that lower prices on products.

Since 2015, when the Vietnam-South Korea FTA took effect, the tariff has been cut to 0-5 percent, paving the way for more imports from South Korea to enter Vietnam.

The Vietnam Association of Cosmetics - Flavoring and Essential Oil reported that there are 400 cosmetic enterprises, including 100 foreign enterprises. Most global cosmetics brands, from middle- to high-end are present in Vietnam, such as L’Oreal, Kanebo, Ohui, Whoo, Theo Body Shop, The Faceshop, L’Occitane, Dior, Chanel and MAC.

In terms of market coverage, South Korean cosmetics are the most popular in Vietnam which account for 30 percent of market share. The products from the EU rank second with 23 percent, followed by Japanese 17 percent, Thai 13 percent, the US 10 percent and other countries 7 percent.

Observers said South Korean brands are favored because these are Asian brands, believed to be more suitable to Vietnamese skin. The products have more reasonable prices than European ones.

Both South Korean and European brands have been expanding their network in Vietnam and running sale promotion campaigns to lure more customers.

In June 2019, Clinique from France opened an authorized shop on Lazada website after it opened 11 physical shops in Hanoi and HCMC.