VietNamNet Bridge - A series of large investors such as Toyota, Madaz and Ford have abandoned auto projects in Vietnam, or do not intend to invest more because of concerns about the underdeveloped support industries.

VietNamNet Bridge - A series of large investors such as Toyota, Madaz and Ford have abandoned auto projects in Vietnam, or do not intend to invest more because of concerns about the underdeveloped support industries. 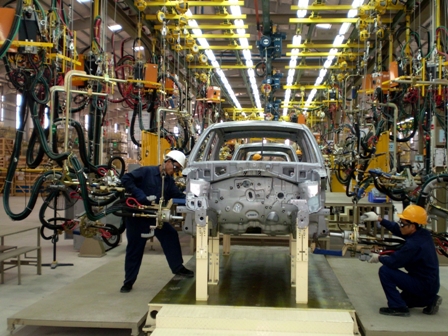 Recently, Nissan said it would invest $100 million more in an automobile factory in Indonesia to increase production capacity from 100,000 vehicles to 250,000 vehicles in 2014.

Earlier, Honda also announced that it would consider building a new car factory in Jakarta (Indonesia) with an investment of about $337 million and an annual production capacity of 180,000 vehicles.

Ford tends to focus more on Thailand and the Philippines, although more than 10 years ago they saw Vietnam as an attractive investment destination.

Honda said that they have not fully exploited the chain of the $60 million plant in Vinh Phuc province, so they do not plan to invest more.

Economists said that foreign investors leave the Vietnam’s auto market not only because of a lower market volume than other countries but also the underdeveloped supporting industries in Vietnam.

Moreover, the auto development policies in Vietnam are unclear and unstable. Even the Ministry of Industry and Trade acknowledges that the management bodies and businesses are not aware of the importance of the supporting industries, so the legal framework and mechanisms for developing the supporting industries in general and the auto industry in particular are issued very slowly.

"In October 2004 the auto industry planning was approved, in July 2007 the first plan for the supporting industry was ratified, and in February 2011 the decision on the development policies for several supporting industries were issued. However, enforcement of policies is very limited," said Mr. Nguyen Manh Quan, Director of the Department of Heavy Industry, Ministry of Industry and Trade.

Quan said the supporting industry of Vietnam can only manufacture a few kinds of simple accessories with low technological content such as mirrors, glasses, seat ... with the participation of about 210 companies. Meanwhile, the domestic automobile market is too small, with 100,000-200,000 cars locally assembled a year.

Mr. Duong Dinh Giam, Head of the Institute of Strategic Studies, said that the link between FDI firms and domestic enterprises are not tight. There must be a policy to facilitate this connection. If possible, domestic enterprises can be supported to manufacture components for FDI businesses.

Economist, Dr. Nguyen Minh Phong said Vietnam needs to change its thinking about the supporting industries to see it as an important part of the expected increase in the rate of product localization.