This time last year was the busiest time of for French teachers and students, because DELF and DALF, the French language examinations for certificates granted by the French Ministry of National Education were near. 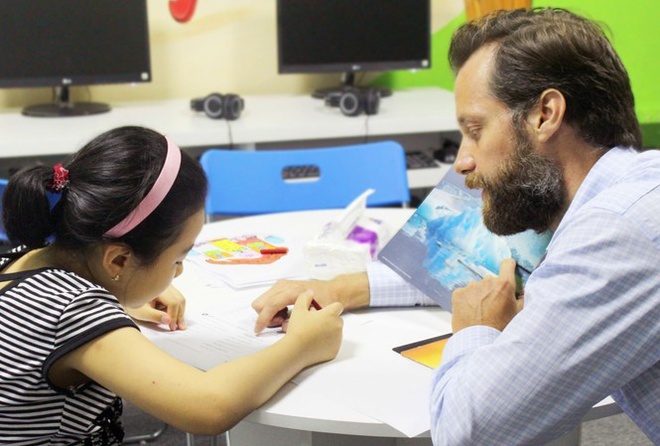 But because of the epidemic, all the examinations have been postponed, and all foreign language centers have closed.

“I am maintaining my life with the allowance from the French government. Honestly speaking, the life is not too difficult, but boring. Bars and pubs all have closed, and so have cinemas,” said Jean Besson, a French teacher in Vietnam.

“I feel tired accessing the internet every day. So I plan to return to France and will come back when the epidemic is contained,” he said.

Most of them are young and many are in the ‘gap year’.

Nguyet Ha in Dong Da district in Hanoi, whose husband is an English teacher, said they have been living on Ha’s wage for the last two months. Alex, her husband, has been staying at home and looking after the children.

“Life has been upset because of the epidemic. But Alex’s situation is better than his friends, whose wives work as housewives and the husbands have become unemployed,” Ha said.

David Orange, an English teacher from the US, who is also a tourism blogger, said it is now the toughest time for foreign teachers.

The teacher can receive part of salary from large foreign language centers, but nothing from smaller centres. His hostel has become a couchsurfing address as too many fellow countrymen don’t have money to rent rooms.

Charlotte Farmer, a French teacher from Toulouse, said she decided to spend a gap year in Vietnam after university graduation. She can work as bartender, French teacher and tour guide, but is unemployed because restaurants have closed, travelers do not come, and schools have closed.

“I think I have to return to France sooner than scheduled because I cannot find a way to earn money at this moment,” the teacher said.

Antoine, a native French speaker, has been living and teaching in Hanoi for 12 years. He has suggested that his students register for intensive one-to-one training courses with teachers in Paris who have a lot of free time now because their schools have closed.

HCM City has decided to extend school break through April 5 to minimize the risk of catching or spreading coronavirus.