Vietnam’s fruit exports to China in Q1 decreased by 6.3 percent compared with the same period last year. The door to the biggest export market is narrowing.

The decrease is attributed to the fact that Vietnam’s exports must go through official channels rather than across border gates. In addition, Chinese customs agencies only accept customs clearance at some certain border gates. 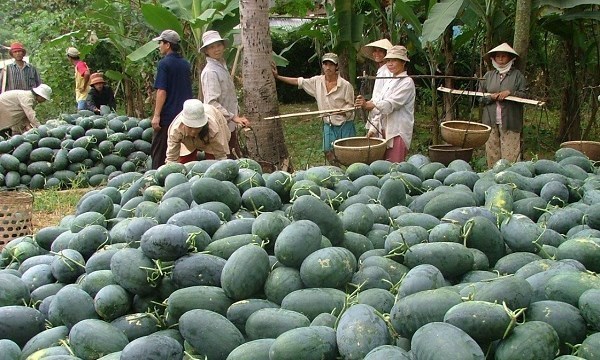 Vietnam had a prosperous year with fruit export turnover reaching a peak of $4 billion, but things did not go smoothly in the first months of 2019.

Vietnam exported $1.4 billion worth of fruits and vegetables in the first four months of the year, an increase of 7.2 percent over the same period last year. China was Vietnam’s biggest fruit consumer in the first three months, accounting for 71.7 percent of market share. However, the export turnover was $680 million, or 6.4 percent lower than the same period last year.

The exports in the first two months were even worse with export value of $585 million, decreasing by 9.7 percent compared with the same period in 2018.

The Vietnam Vegetables and Fruits Association explained that there was a long Tet holiday in the first two months, while it was the time when Chinese harvested dragon fruit and water melon. China has also strengthened product quality examination and traceability.

MARD said China has changed many regulations on fruit imports from Vietnam. Exporters have to satisfy Chinese requirements on food safety and quarantine, register growing area codes with Chinese customs agencies, and declare the origin of products.

From October 1, 2019, imports must get certificates on food safety granted by Chinese agencies to consignments of imports.

Besides China, the demand from other important markets in Southeast Asia also decreased sharply in the first two months, including Malaysia (- 52 percent) and Thailand (- 31.8 percent).

Only the strong rise of the exports in March, especially in the second half of the month, helped exports in Q1 recover. The export turnover in the entire Q1 was $948.9 million, a modest slide of 2.1 percent.

Nevertheless, while the export turnover from China and Southeast Asia decreased, the figures from other markets increased.

On April 18, Dong Thap provincial authorities joined forces with MARD to organize a ceremony on announcing the export of the first consignments of mango to the US.