Strikers Nguyen Anh Duc and Nguyen Thi Minh Nguyet have won the Golden Ball Award for the best footballers of 2015 in the men’s and women’s categories.

Strikers Nguyen Anh Duc and Nguyen Thi Minh Nguyet have won the Golden Ball Award for the best footballers of 2015 in the men’s and women’s categories. 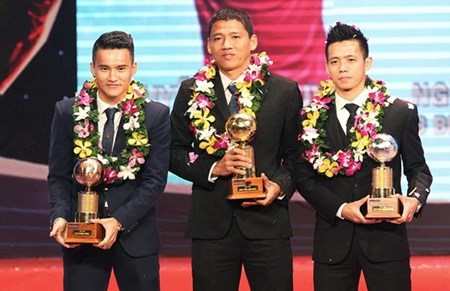 
Duc, a striker of the V.League champions Becamex Binh Duong, overcame many nominees to take his first ever title in the annual national vote organised by Sai Gon Giai Phong newspaper.

The former No 1 national team forward has grabbed three titles with his team this season: the V.League trophy, the National Cup and the National Super Cup.

"It's like I am flying high in the sky. I am really happy and lucky today to win this statue," said Duc.

"It is my great honour to thank my family, friends and teammates who strongly supported me to make me successful today," he said at the awarding ceremony at the HCM City Opera House on January 6.

In the women's category, striker Nguyen Thi Minh Nguyet of Hanoi was honoured the best player. She was followed by Nguyen Thi Tuyet Dung from Ha Nam FC and Huynh Nhu of the defending champions HCM City.

"It is the second time that I have a chance to be on this stage. But this time I got the Golden Ball. It is great feeling that I have enjoyed. I am happy, really happy now," said the new queen of the country.

Phuong, who is training with the national U23 squad in Qatar for the Asian championship, said through a video clip sent to the organisers: "The award is a dream to all players and I am the most lucky one. It will encourage me to try my best in my career."

Two other awards were best foreign player which went to Abass Chiekh Dieng of Becamex Binh Duong and best futsal player belonging to Tran Van Vu of Thai Son Nam Club. It was the first time in its 21 years that the organisers presented an award to futsal.