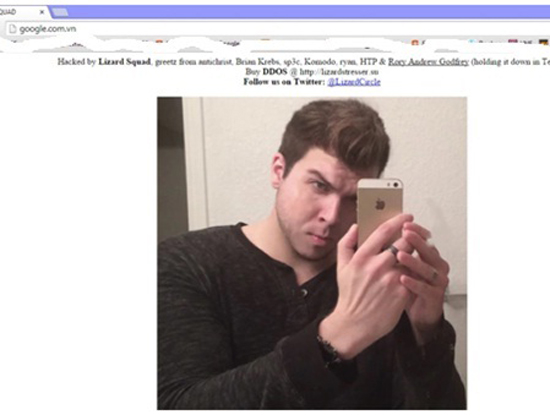 Millions of Vietnamese could not access google.com.vn on noon at February 23. Instead of the interface for information search, they saw an image of a young man who seemed to show off his iPhone, and the notice that the website had been hacked by Lizard Squad.

Lizard Squad is a black-hat hacking group, known for its claims of distributed denial-of-service (DDoS) attacks to disrupt services related to gaming.

The error was confirmed by BKAV, which said the unfamiliar interface appeared when people tried to search google.com.vn and it did not automatically change into  https://google.com.vn as usual.

When users tried to access with https (Hypertext Transfer Protocol Secure) by adding “s” to the address, they saw the notice “Your connection is not private. Attackers might be trying to steal your information from www.google.com.vn.”

Users did not meet the problem accessing google.com, the Google’s international domain name.

The website only returned to normal conditions at 2 pm on February 23. When BKAV’s engineers checked Google.com.vn, they saw “74.125.23.94”, the IP address of Google.

BKAV’s deputy chair Ngo Tuan Anh said on Buu Dien on the same day that the website’s interface changed because Google’s DNS had been tampered with.

An official of the center on February 24 affirmed that the system still provides services as usual and can give answers all queries.

These are the two of the DNS Hosting servers of Cloudflare, a well-known cloud computing service provider.

VNNIC said the error affected all access to google.com.vn. Access to the third address “ns3.google.com” was successful.