Vietnam to boost relations with Belgium

Vietnam hopes to further increase cooperative relations with Belgium in various fields for practical benefits and the common development of both countries. 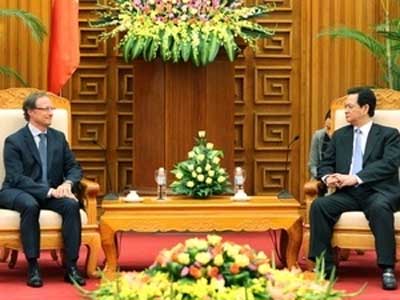 Speaking at a reception in Hanoi on November 27 for the new Belgian ambassador, Bruno Angelet, Prime Minister Nguyen Tan Dung said much bilateral cooperation potential remains untapped, and that the two countries should focus their cooperation in such fields as economics, trade, investment, science and technology, and education and training.

They should support each other at regional and international forums, especially the United Nations, and strengthen the exchange of delegations, Dung said.

He also asked for Belgium’s continual provision of ODA to help Vietnam adapt to climate change and rising sea levels, as well as support the acceleration of the Vietnam-EU FTA negotiations.

The Belgian diplomat pledged to spare no effort to increase bilateral relations in various fields, especially in economics, trade and investment.

The affirmation was made on November 27 in a meeting between Dutch Prime Minister Mark Rutte and Vietnam’s Deputy Prime Minister Hoang Trung Hai, who is visiting Holland from November 26-30.

During the meeting, Rutte applauded the socio-economic development of Vietnam, especially in reducing poverty and intensifying international integration, as well as its efforts to weather the global financial and economic recession.

Holland will accelerate the ratification of the signed partnership and cooperation agreement (PCA) between Vietnam and the EU, and foster the development of a Vietnam-EU free trade agreement (FTA).

For his part, Hai thanked the Dutch Government for its development aid to Vietnam over the past years, expressing his hope that Holland will continue aiding the country in infrastructure development and education.

He took the occasion to convey Prime Minister Nguyen Tan Dung’s invitation for Rutte to visit Vietnam, which Rutte accepted with pleasure.

Expressing their delight at their relationship’s positive development in all fields, the two sides agreed to strengthen delegation exchanges at all levels and coordinate closely to celebrate the 40 th anniversary of diplomatic ties between the two countries in 2013.

They also agreed to create favourable conditions for businesses from both countries to invest in each other’s market.

Whilst in Holland, Hai will meet the Minister of Foreign Trade and Development Cooperation, the Minister of Infrastructure and the Environment, and the Mayors of Amsterdam and Rotterdam.

He will co-chair the second meeting of the Vietnam-Holland inter-government committee in response to climate change and water management, attend a CEOs round table meeting, visit several prominent businesses and make fact-finding tours to economic establishments.

Scholars and scientists should continue to study Viet Nam and share with the country what they learn about state management and leadership, Party General Secretary Nguyen Phu Trong said at a reception in Ha Noi yesterday, Nov 27.

At the reception, held to honour scholars from 28 countries and territories who have come to attend an international conference on Vietnamese studies, Trong thanked the delegates for their contributions to Viet Nam's development. Their studies will aid the international community's understanding of the country's renewal process, history, culture, land and people, he said.

Delegates said that the conference is valuable not only to Viet Nam but also to those who study the country.

They affirmed that Viet Nam's experiences with development will become a source of reference for developing countries and international researchers.

They said they believe that under the leadership of the Party, the Vietnamese people will continue to reap achievements related to international integration and sustainable development.

President Truong Tan Sang urged voters to join forces with relevant agencies to combat corruption at his meeting on November 26 with more than 300 voters from District 1, Ho Chi Minh City.

On voter Tran Van Lai’s request to provide further explanation of the term “group interest” and its relation to corruption, President Sang said each voter should utilise their supervisory role to hold officials accountable.

“The Party and State always listen to the people’s suggestion”, he said.

Voters at the meeting welcomed the move by the National Assembly to hold votes of confidence for officials in elected positions or those approved by the NA or People’s Councils.

Sang said holding confidence votes was a vital task of the whole political system, which if implemented smoothly, will yield remarkable progress.

He added that voters should thoroughly discuss with NA deputies before they cast their votes so that these reflect the voice of the people.

Responding to a question on the inefficiency of the current practice for State officials declaring assets, Sang explained that it was because the relevant agencies had not fulfilled their job criteria.

In addition, their income was difficult to track because cash transactions remain popular.

Sang called for active participation from Ho Chi Minh City voters in a referendum on constitutional amendment slated to occur early next year.