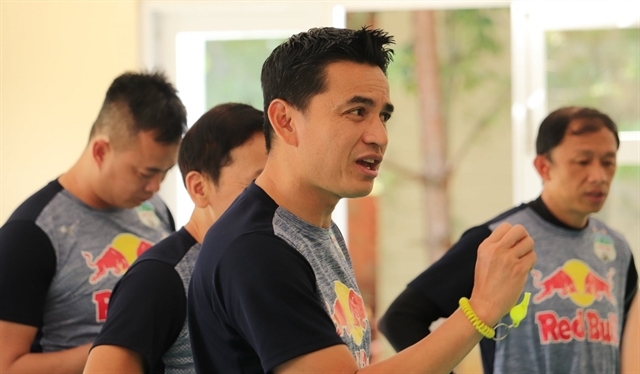 Coach Kiatisuk Senamuang’s HAGL has seven players in the Việt Nam squad competing in the second round of the 2022 World Cup qualifiers.

Currently, the team is training daily at Ham Rong sports training centre as HAGL has a full squad after the players returned from the national team.

“HAGL has many footballers playing for the national team so it is very important to maintain training because it is our responsibility that whenever the team needs us, we will provide players in the best possible condition.

“HAGL's dream is to compete in the AFC Champions League. But it all depends on reality, first of all, that the COVID-19 pandemic must be controlled so that football can return.

“I think it will be better if the V.League 1 can organise one or two matches in August. If the organisers allow it, we will train until the league can continue."

In the second round of the 2022 World Cup qualifiers, HAGL’s players were key members of coach Park's squad.

Phuong, Thanh and Vuong all scored in the campaign, while Toan won the match-winning penalty against Malaysia.

It is expected that the national team will gather in Hanoi on August 24 to prepare for upcoming qualifiers.

Viet Nam will play the opening match in the final round of 2022 World Cup qualifier against Saudi Arabia on September 2.