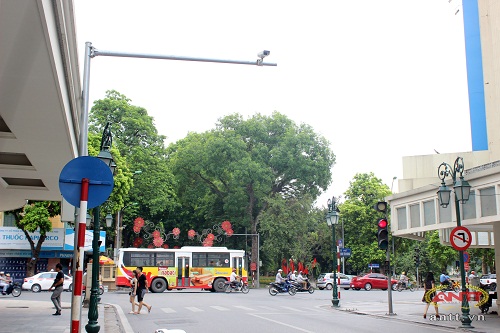 A total of 450 cameras have been placed at more than 150 intersections in Ha Noi since the beginning of December.

Under the programme, the cameras record images of the violators, their vehicle plate numbers, and the time and place of the violations, which are then transmitted to the centre.

Police working at the centre then find the violators' identification and addresses, and issue appropriate punishments.

Commander Huynh Tan Nam, head of the Traffic Light Team under the Ha Noi Traffic Police Division, said drivers who fail to stop at a red light or drive in the wrong lane will be fined VND1 million (US$40), and his or her licence will be withdrawn for one month.

The police use those images as a foundation to issue fines to violators.

The images must be checked carefully to avoid issuing incorrect punishments, he said.

A total of 50 LED screens open from 7am to 10pm every day at the Ha Noi Traffic Controlling Centre to receive images and data of traffic violations. Police on duty at the centre connect with the police on duty at intersections to discuss the violations and issue proper penalties.