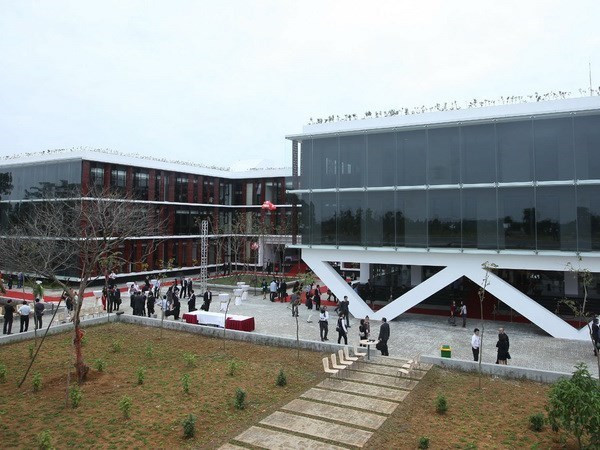 Part of the software village in the Hoa Lac Hi-tech Park of Hanoi (Photo: VNA)

In its development plan for 2030, with a vision towards 2050, Hanoi has planned to establish five satellite urban areas, namely Son Tay, Hoa Lac, Xuan Mai, Phu Xuyen and Soc Son, covering a 25,000 hectares.

The move aimed to accelerate overspill from the crowded city, reduce traffic congestion and pollution, and enhance a balanced development between the city centre and the suburbs, contributing to promoting Hanoi’s industrialisation and linkages with regional provinces.

However, after years of planning, these areas have yet to be completed.

Located across the districts of Thach That and Quoc Oai, and Son Tay township, Hoa Lac is the largest and oldest among the five with 17,274 hectares and a population of around 600,000. It includes a campus of the Vietnam National University Hanoi and the renowned Hoa Lac Hi-tech Park.

It is home to numerous leading Vietnamese corporations, such as Viettel, VNPT, FPT and TH Group, as well as major foreign investors, particularly those from the Republic of Korea and Japan.

These projects have occupied just a small part of its total area while the majority yet to be cleared. Additionally, an absence of fully-developed infrastructure, especially in terms of transport, has led to a lack of proper connectivity between Hoa Lac and other regions.

Phu Xuyen satellite area is expected to be the city’s hub for industry and services in the south which houses ports and logistics centres. It is also being developed as a multi-functional urban area for education, healthcare, entertainment and trade services to foster urbanisation of southern Hanoi, but it looks nothing like a modern urban area after the planning was released a decade ago.

According to La Hong Son, deputy head of the bureau for planning and management of satellite cities and rural development under the Hanoi Authority for Urban Planning and Architecture, looking at worldwide practices, regional planning and satellite urban models have proved effective in addressing long-time urban problems. They have encouraged the relocation of inner-city dwellers to satellite cities, reduced overcrowding in the inner districts and resolved many issues of the core city which has been already overwhelmed with pressure from severe traffic, a lack of schools and pollution, he said.

Former Director of the Hanoi Urban Planning Institute La Thi Kim Ngan said that planning would be nothing if it is not relevant to reality. Planning must go together with the provision of resources, determination and a roadmap for implementation, she suggested.

The city also needs to speed up progress and improvement of regional planning to provide a common planning for satellite cities. Delays in this process will affect investment attraction and socio-economic development plans./. VNA