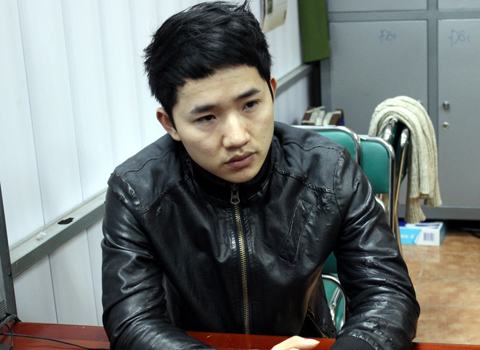 According to the police, Toan worked at FPT from 2008 to 2010. He attended a programming training course at the Hanoi Polytechnic University - Aptech Center then through a foreign website, he bought the domain name “xinhv” at the price of $10 and designed a website for himself.

The site attracted more than 13.6 million hits. Toan began thinking of doing business on the website, through of selling ads banners.

To rent advertising banner on the website xinhv, clients contacted with Toan via e-mail and transferred money to his bank accounts.

Toan collected VND400,000-VND2 million/month from each banner. Each month he earned VND3 million. The total income he earned from the site was more than VND30 million ($1,500) by the time of arrest.

Huu registered the domain names and the server at the website goodaddy.com. Huu was the technical master of the web while Son was in charge of the content.

Huu searched sites on betting, lottery ... and sent email inviting them to post ads on lauxanh.xxx.

Customers want to rent advertising banners on the site contacted with Huu via mail. Each ad, Huu was paid with a phone card worth VND500,000 ($25,000)/week.

Son earned money from the prostitutes who posted their information and photos on lauxanh.xxx.

Prostitutes contacted Son to be photographed and wrote a post on the site. Son collected VND500,000-VND1 million ($25-100) from each girl. Son benefited a total of VND21 million by the time of arrest.

Both cases are further clarified.