Rising housing prices in Hanoi were mainly due to scarce supplies and higher prices of construction materials.

Average housing prices in Hanoi in the third quarter maintained an upward trend, rising 5% from the beginning of 2022, up for the 15th consecutive quarter, despite no real estate projects being approved.

According to the Hanoi Construction Department's reports on the city's real estate market in the third quarter, supply remained tight, mainly due to the tightening of banks' credit policy for real estate projects and complicated investment procedures.

In the third quarter, over 3,600 new apartment units were sold, primarily inventories from the previous quarters in Hoang Mai, Long Bien, and Ha Dong districts.

There have also been supplies from housing projects located in districts far away from the city's center, such as Me Linh, Dong Anh, Hoai Duc, Quoc Oai, Soc Son, Gia lam, and Son Tay village.

The report also noted that the increase in house prices in Hanoi was mainly due to supply shortages and rising building materials.

In the June-September period, the number of apartments sold accounted for 10% of the total on offer, mainly in the luxury segment with high prices, such as the T&T Capella Pham Ngoc Thach at VND80 million per square meter.

Apartments in the mid-price range of less than VND40 million per square meter came from Long Bien, Me Linh districts, including Eurowindow River Park with prices of VND30-32 million per square meter; Binh Minh Garden with VND34-38 million; Le Grand Jarmin with VND38 million, as they were 10% higher than prices set in the same period last year, and 2% against the second quarter.

Meanwhile, due to high prices, there were almost no transactions of detached houses recorded, as low-rise houses in districts of Ha Dong and Hoang Mai are offered at VND200 million (US$8.000) per square meter, respectively and up to VND100 million (US$4.500) in Me Linh District. 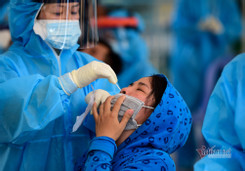