Hanoi speeds up to end use of coal stoves 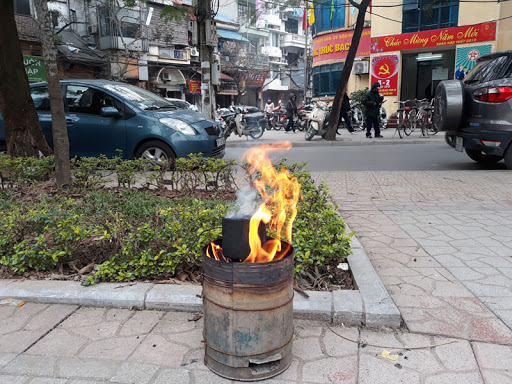 The numbers were announced at the conference about the opening of Hanoi civic commitment website which includes 25 solutions in energy, transportation, waste, air quality, and urban planning. In the report about eradicating coal stoves in Hanoi, Le Thanh Thuy, from the Department of Natural Resources and Environment's Hanoi Environmental Protection Agency said the as of June, the number of coal stoves in Hanoi had reduced by 72.8% to 15,000 stoves compared to 2017.

In January 2017, Hanoi has a total of 56,670 stoves. The stoves were mostly used by small restaurants and food stalls on pavements. Many families in both rural and urban areas use them to save the costs of gas and electricity.

Four districts that have been able to reduce the most number of coal stoves are Hoan Kiem, Soc Son, Ung Hoa and Long Bien districts. In 2017, there were 14,817 stoves. This number has been reduced to 420 this June.

"Over 70,000 people will not have to suffer from air pollution from coal stoves," Thuy said.

In last November, Hanoi People's Committee Chairman Nguyen Duc Chung signed the document about eradicating the use of honeycomb charcoal by 2021 to curb air pollution caused by cooking from 160,000 households.

The Department of Natural Resources and Environment then worked with the Local Governments for Sustainability, Live & LearnCentre to build the Hanoi civic commitment website, hanhdongvihanoi.org where Hanoians can submit their commitments and act to improve the city's environment. Laodong/Dtinews