The Ha Noi's Department of Transport will reduce the  number of buses on roads where construction sites are located, to ease  traffic congestion during rush hours, from today.

The Ha Noi's Department of Transport will reduce the  number of buses on roads where construction sites are located, to ease  traffic congestion during rush hours, from today. 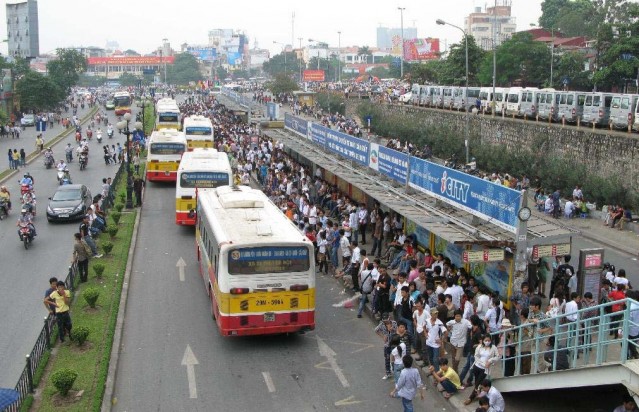 Ha Huy Quang, director of the department said that on Nguyen Trai Street,  bus numbers 02 and 22 will run seven minutes per route instead of five,  while bus numbers 21, 27 and 39, will run every ten minutes instead of  eight.

Nguyen Trai-Ha Dong is a busy road in the city with 10 operating bus routes  and 9,500 passengers every hour in peak traffic time. The adjustment will  cut down 25 per cent of bus numbers on the road, Quang said.

The measure will help decrease 24 bus trips every rush hour, or equivalent  to 46 per cent.

The adjustment in bus frequency and routes will affect the travelling  demands of residents but lessen traffic congestion, Director of the Ha Noi  Urban Traffic Management and Operation Centre Nguyen Hong Hai said.

The measures will remain until barriers at the constructions sites are  removed, he said.

To ease traffic jams during year-end months, Vu Van Vien, director of the  municipal Department of Transport, said that the transport sector is  focussing on reviewing and repairing degraded roads and pavements.

The department will make inspections on barriers at construction sites and  punish violations with regard to areas and construction time, he said.