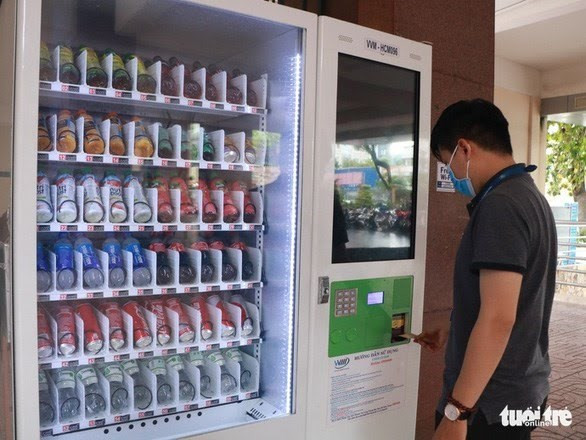 Expanding the network will help the capital city promote modern trade and boost tourism, she said.

Seeing this as a green light, producers are designing new machine models with extensive functions like touch screen, fall detection sensors, integrated billing and mobile payment via QRPay, Zalopay, Momo and others.

As a daily exerciser around Hoan Kiem Lake, a highly trafficked area where beverage vending machines are easy to spot, Nguyen Thi Thuan said she finds them very convenient.

Thuan, a senior citizen who lives in Hoan Kiem district in downtown Hanoi, said the vending machines come to the rescue whenever she feels thirsty and needs refreshment.

It is very hygienic, she noted, adding that the machines should be installed in more places.

Echoing Thuan’s view, Pham Kim Dung, a resident living in Hang Trong street, said it is very convenient to buy a drink whenever she wants. The products are well-arranged, she said.

However, she suggested these machines need regular maintenance and repairs to prevent malfunctions, for example items or banknotes getting stuck, giving consumers an unpleasant experience.

According to a source at VVM Investment and Trade JSC, one of Hanoi’s vending machine suppliers and operators, monthly revenue from the machines installed around Hoan Kiem Lake is quite high, ranging from 12 million – 15 million VND. A representative of Minh Lam Vending Machine Co., Ltd. said turnover of those in the inner districts of Ba Dinh and Tay Ho stands at around 5 million – 12 million VND.

Data from the Hanoi Department of Industry and Trade shows there are 717 vending machines, selling beverages and snacks, across the capital city. They include 13 installed along pedestrians’ streets around Hoan Kiem Lake and the districts of Ba Dinh and Tay Ho, and four at Hanoi Book Street and Phung Hung Mural Street in the city centre.

The remainders are placed inside office buildings, apartment buildings, bus stations, shopping malls and others.

The department is making a list of public places, such as parks, gardens, monuments and relic sites, schools, hospitals, cinemas and shopping centres, potentially suitable for the installment of vending machines. After the installation is done, the network of these machines will be publicised in the city’s shopping map website at bandomuasam.hanoi.gov.vn as well as its tourist map.

In addition to beverages and snacks, the machines will probably offer fresh fruits, handicrafts, fine art products and souvenirs.

In April, Vice Chairman of the Hanoi People’s Committee Nguyen Manh Quyen approved a plan for the installation of vending machines at public places in the capital city from now until 2025 in a bid to gradually replace street vendors and hawking practices that have become ubiquitous throughout the city and Vietnam.

The plan also aims to modernise retail models, increase transparency of the products offered to consumers, and gear transactions towards cashless payments.

According to the plan, each machine will occupy a space of 2-3sq.m and be placed about 500-1,000m from each other. A single area could have up to four machines next to each other depending on practical demands.