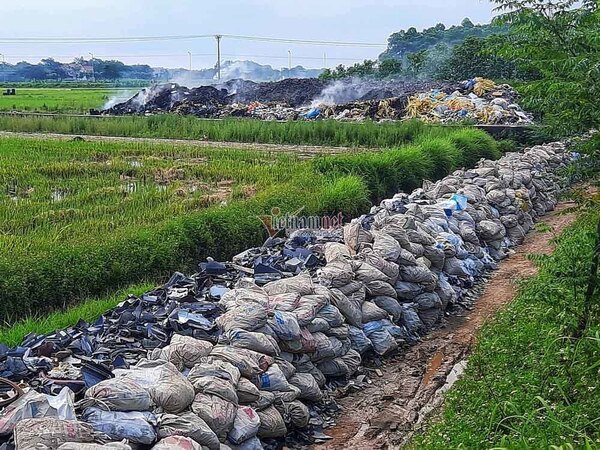 Millions of TV screens and electronic boards have been piling up along fields for six years.

The news stories about the excessive volumes of furnace dust produced in steel manufacturing plants in Thai Nguyen, the tons of garbage buried on top of a mountain in the central area of Vinh Phuc, and a river "choked to death" by a paper craft village in Bac Ninh are proof that large cities are being harmed by hazardous waste.

Travelling along 2A Highway that goes through Phuc Yen City and Yen Lac and Vinh Tuong districts to Vinh Yen City in Vinh Phuc province, one can see many columns of smoke originating from residential landfills along the roadside.

The waste is collected at hundreds of temporary landfills with a total area of hundreds of thousand of square meters. Most of the waste is treated by burying or burning.

In Vinh Tuong district, millions of TV screens and electronic boards have been piling up along fields for six years.

In the central area of the province – Vinh Yen City – Bong Mountain in Khai Quang Ward receives 100 tons of waste daily. The accumulated waste is now up to tens of thousands of tons, and is still being buried.

In Thai Nguyen, Tisco has 10,000 tons of outdoor furnace dust, a kind of hazardous waste, in the central area of Thai Nguyen City

In Bac Ninh province, residents in Phong Khe Ward have been affected by pollution caused by the paper craft village.

There are over 200 paper production workshops in a small ward which produces smoke and dust every day. Yellow waste water in the sewers can be seen going to storage tanks and then to Ngu Huyen Khe River.

A report on the national environment situation released by Ministry of Natural Resources and Environment (MONRE) in 2020 showed that 60,000 tons of domestic solid waste are discharged every day throughout the country, including 30,000 tons a day in urban areas and 28,000 tons in rural areas. The figure is 46 percent higher than 2010. The collection rate is 58 percent.

There are 1,300 domestic solid waste treatment establishments, most of which are landfills (904, or 71 percent). In HCMC, 9,000 tons of waste are discharged every day, of which 70 percent is buried.

Waste as a resource

Statistics show that only 20 percent of landfills can meet sanitation requirements. Landfills pose challenges as the method not only causes pollution but also wastes energy which could be created from the waste.

To deal with the increasing amounts of waste, the General Directorate of Environment under MONRE has launched a project on strengthening solid waste treatment capability in Vietnam.

Solid waste must be considered as a kind of resource. Policies are needed to encourage treatment that turns waste into input materials and environmentally friendly products.

Only eight localities in the country have a daily waste volume of under 300 tons. In other localities, the volume is above 300.

Hanoi, with 6,500 tons and HCM City, with 9,000 tons of waste, are expected to meet the requirements to operate incinerators to generate electricity.

However, even with modern technologies, one big problem still exists – the classification of waste at source, which is mentioned in the Government’s Decree 40.

If waste can be classified into three groups - burnable, recyclable and others types of waste, it would be easier and more effective to treat. Experts have said that classification is an important factor in applying the waste-to-energy model in Vietnam.

Domestic waste as well as hazardous waste can also be turned into valuable resources. The furnace slag produced during steel manufacturing, for example, can be recycled into building materials, such as bricks.