Experts have warned that workers say they will only return to HCM City after Tet, leaving a labor shortage at many businesses. 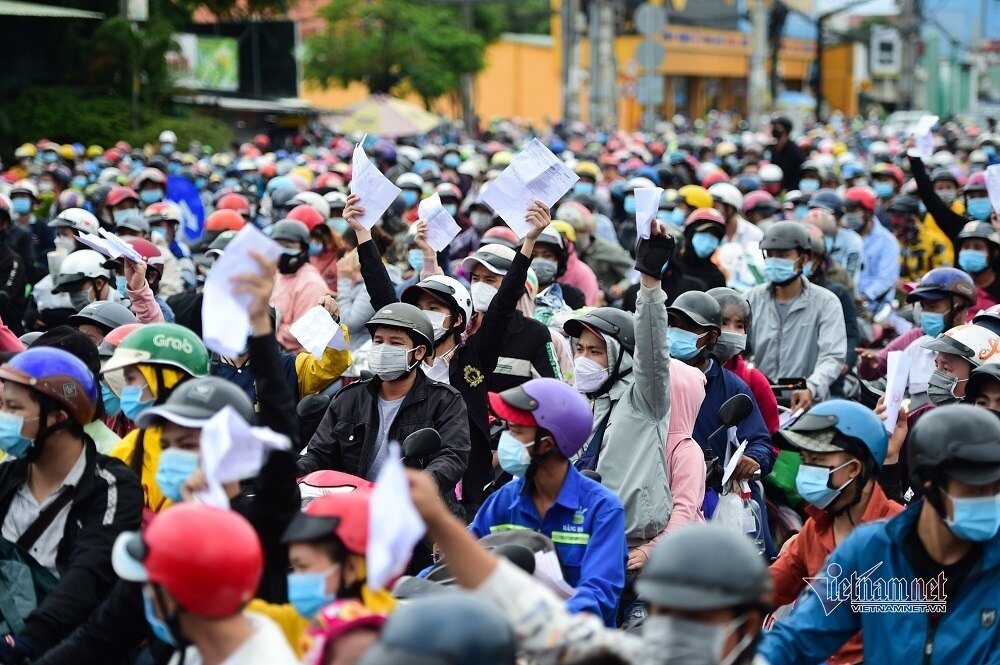 “My workers all have left for their hometowns,” said Nguyen Hoang, the owner of a restaurant on Bui Vien Street, pointing to tables and chairs covered with dust after a long period of closure during social distancing.

The closure has caused significant losses to Hoang and other owners of restaurants in the city. However, if they reopen, they will face another problem – a lack of workers.

Hoang messaged his workers and invited them to come back to work, but they said they would only consider returning when the 2022 Tet holiday ends.

After her husband died because of Covid-19, Dang Thi Thu Loi in Nui Thanh District in Quang Nam, decided to leave Binh Duong and return to her hometown with her two children. She has run out of money after several months of being unemployed. She wonders when HCM City and Binh Duong will control the pandemic to receive workers back.

“I really want to continue working in the city. The wage is not high, but it is better than what I can earn in my home village,” she said while in quarantine in her hometown.

Analysts say that business owners are seeking workers but the relation between supply and demand has been disrupted. The mass flow of workers leaving for hometowns and slowly coming back to HCM City will cause a serious shortage of skilled workers.

According to HCM City Social Insurance, during the social distancing time, from May to September, 337,730 workers terminated labor contracts and 665,946 workers took unpaid leave.

As such, the number of workers temporarily stopping working or losing jobs after five months of social distancing reached 1,046,676, or 41.2 percent of the 2,439,272 workers paying social insurance.

Analysts said that with the serious damage, the domestic labor market will recover very slowly.

Hoang Cong Gia Khanh from the HCM City University of Economics and Law pointed out that both the numbers of workers and jobs are decreasing sharply. From October 1 to 7, as many as 141,462 people from HCM City, Dong Nai and Binh Duong returned to localities in the southwestern region via Long An gate and 43,000 people returned to the Central Highlands via Binh Phuoc gate.

There are no official statistics about the number of workers leaving HCM City, but analysts believe that enterprises will face a labor shortage as workers will not return until the Tet holiday ends.

Khanh said on October 16 during a workshop on socio-economic development in 2022-2025 that economic recovery after the pandemic would depend on the pace of job re-generation. The policy on supporting businesses should focus on mitigating layoffs, re-recruiting workers who have left, and attracting skilled workers back.

Khanh suggested using the city’s budget to subsidize 25 percent of the regional minimum wage from September 2021 to March 2022. The program would be implemented in two stages, estimated to have the value of VND4 trillion, equal to 0.29 percent of HCM City’s GRDP (Gross Regional Domestic Product).

Nguyen Trong Hoai from the HCM City Economics University stressed the need to eliminate the inconsistency in pandemic prevention and control policies set by different localities. It’s necessary to unify regulations in order to remove administrative barriers to the intra-regional labor flow.

To attract workers back to work, policies on minimum wage applied to the private sector need to be changed. The minimum wage levels need to be lifted gradually to cover spiraling prices and raise the standard of living.

The provincial authorities in the southern key economic zone have asked the Government to set minimum wage thresholds based on regional price levels to ensure worthy living standards for workers.

Vietnam needs to give up the view of attracting FDI (foreign direct investment) with cheap labor costs.

Regarding accommodations for workers, it’s necessary to set up standards for guesthouses and dorms and provide preferential loans to guesthouse developers so they can improve accommodation quality, thus improving the living standards of workers.

In recent days, workers from the Central Highlands provinces are returning to HCMC, Dong Nai, and Binh Duong to continue their jobs because they know that social distancing has been loosened, and businesses have started to resume production.