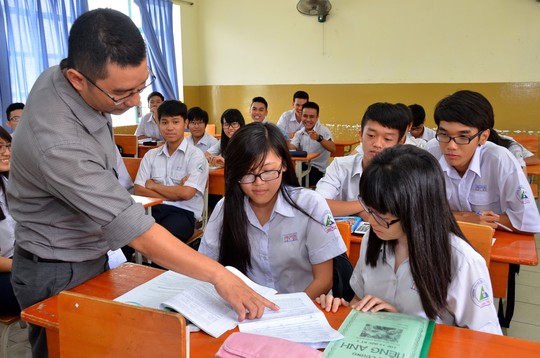 The headmaster of a high school in district 1 said the school can only gave lessons in English to 10th graders, not to 11th and 12th graders, because of the lack of teachers and incomplete curricula.

“It is very difficult to find teachers to give lessons. They need to be good at both science and English,” he said.

Meanwhile, the headmaster of a high school said that the biggest problem was not the lack of qualified teachers, but the pay scheme.

“While schools have set very high requirements on candidates, they cannot offer high pay,” he explained. “If you don’t have money, you won’t be able to recruit good teachers.”

Nguyen Thi Thu Cuc, headmaster of Gia Dinh High School, said the school was lucky enough to have two good teachers who can teach math and chemistry in English.

However, the physics teacher is a visiting teacher, a PhD who is a permanent lecturer at a university.

A math teacher from a high school in district 1 noted that the city’s students were now good at English. If teachers’ English skills are poor, they will not be respected by students.

Cao Huy Thao, former headmaster of the Vietnam-Australia International School in HCM City, said it was good policy to use English to teach science in general schools and that more schools needed support.

Hoang Thi Diem Trang, deputy headmaster of Gia Dinh High School, said the school’s teachers have to compile lesson plans by consulting with colleagues and collecting information from the internet.

“Previously, we applied the curriculum of Cambridge University (textbooks). However, as it was too expensive, we gave up,” Trang said.