The coal-fired power plants in the region are believed to be a main contributor to the increased pollution in HCM City.

HCM City authorities have made public the causes of the increase of pollutants such as PM 10 and PM 2.5 dust, CO and SO2, which have many times exceeded the permitted levels, threatening the health of local people. 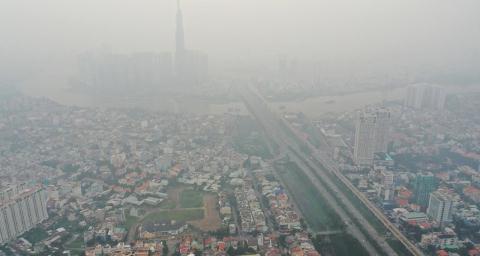 However, Phung Chi Sy from ENTEC (the Environmental Technology Centre) said the reasons cited by the HCM City Department of Natural Resources and the Environment are not sufficient.

Regarding industrial emissions, the expert said dust, smoke and emissions from coal-fired thermopower plants are a big contributor to pollution in the city.

There is only one thermopower plant in HCM City and put under the management of the city – Thu Duc. However, the city is surrounded by a series of thermopower plants located in neighboring areas and Mekong Delta.

If the plants run with Chinese technology, they affect the environment quality, even if using modern waste treatment systems. The waste generated from this activity will mainly be dust, coal ash, industrial wastewater, NOx and SO2.

With the ability to emit a long distance from several to tens of kilometers, the ash and slag discharged from the coal thermal power plants can reach HCMC.

“Coal-fired plants are hundreds of kilometers away from HCM City, but they still can affect the city because of the southwest wind,” he said.

“Vietnam suffers from forest fires in Indonesia and bears influences from pollution cases in the world. So, the influences from the coal-fired plants are unavoidable,” he said.

The expert went on to say that though coal-fired power plants are not the major cause in HCM City, the municipal authorities still need to pay attention to the source of pollutants, because the harm isvery worrying.

He said it is necessary to find solutions for transport first, such as restricting old vehicles in circulation, because smoke and dust from transport is the major cause of pollution.

Along with air pollution, Hanoi's demand for purifiers on the rise

Many people in Hanoi are buying air purifiers to cope with rising air pollution.

PM Nguyen Xuan Phuc has ordered the Ministry of Natural Resources and Environment and the governments of Hanoi and HCMC to promptly adopt effective solutions to address the worsening air pollution, the local media reported.