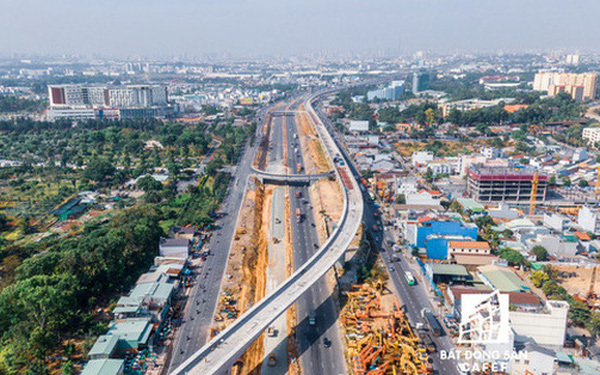 JLL has reported that real estate prices in HCM City continue to rise. Villas have seen prices climb to a new high of VND127 million per square meter, a sharp increase of 36 percent over the same period last year.

The urban areas in the suburbs have become new destinations thanks to their good transport infrastructure and reasonable prices.

Even before the municipal authorities decided to propose merging districts Thu Duc, 2 and 9 to form a 'new city' in the east, the area had already received new investment following the development of transport projects.

Dinh The Hien, a respected economist, said that the eastern part is one of the most dynamic areas because of the big investments to develop infrastructure, from deep water seaports, highways, and belt roads to large industrial zones.

The area is expected to receive hi-tech and environmentally friendly projects, with great potential for development.

A report found that in 2010-2020, 216 projects were implemented with total capital of VND350 trillion, 70 percent of which were infrastructure items connecting to the eastern part of HCM City.

The announcement of a plan to establish Thu Duc City in HCM City has caused land prices in three districts in the eastern part to escalate.

A survey by gachvang.com found that the land prices on Pham Van Dong and Linh Dong Roads in Thu Duc district have soared to VND86.8 million per square meter and VND54.9 million, respectively.

The prices were VND80-83 million and VND45-50 million per square meter, respectively, before the plan to form Thu Duc City got the Prime Minister’s approval.

In the apartment market segment, products of nine projects in the east opened for sale in the first 10 months of 2020.

These provided 8,000 apartments, or 66.3 percent of the total supply of the city (12,134 apartments). The products had an average selling price of VND38-67 million per square meter.

Analysts say it is nearly impossible to find apartments priced at below VND35 million per square meter in the eastern part of the city.

Tran Khanh Quang, general director of Viet An Hoa Real Estate, said that real estate prices in the eastern part are very high with the prices of many apartments increasing by twofold.

Some analysts say that HCM City is developing the eastern part too much, while abandoning the western part.

However, according to Le Hoang Chau, chair of the HCM City Real Estate Association, the western part has been receiving big investments to develop infrastructure.

“It is untrue that the municipal authorities are forgetting about the west,” Chau said. “Some large hospitals have been built in the west, and Binh Chanh will become an inner district in a 10-year roadmap."

Chau went on to say that transport infrastructure in the west has improved in the last few years thanks to key transport works, including Highway No 1A, provincial Highway No 10, Highway 50, HCM City – Trung Luong Highway and An Suong Overpass.

In addition to subway routes, HCM City is also preparing to kick off new projects, including Belt Road No 3, which will connect the western part of HCM City and the inner districts of Binh Duong, Dong Nai and Long An.

Observers also say the western part is attracting sizable investments with many projects under implementation. Defined as the 'second priority' area, after the eastern part, the real estate products in the west have more reasonable prices.

Nguyen Thi Thanh Huong, a real estate expert in HCM City, said that each part has its own advantages. Real estate develops based on market demand and people’s demand for accommodations.

According to Huong, the population density in the west has risen rapidly recently. The developed infrastructure and reasonable prices are advantages for the western part to continue to develop.