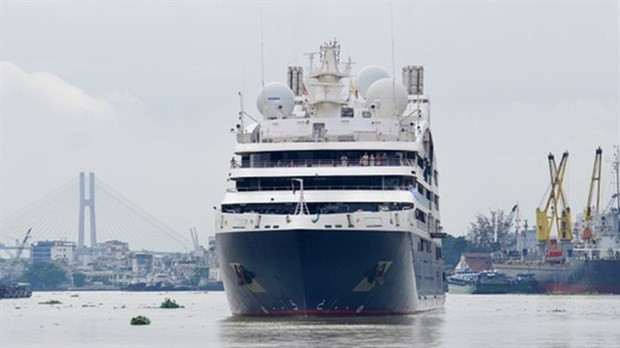 Le Truong Hien Hoa, Deputy Director of the HCM City Department of Tourism, said the city aims to become a new and attractive destination for international cruise ship travellers as they are a major source of visitors to the city.

The city is expected to receive several large cruise ships carrying between 200 and 300 guests by the end of the year, he said.

To welcome them, the city’s tourism sector has focused on improving catering, entertainment, and shopping services, he added.

The department is also working with travel agents, shipping firms, and ports to ensure the best services, including nighttime tourism activities, during their stay in the city, he added.

“The ultimate goal is to ensure the safety and satisfaction of the tourists,” he said.

The city would need to upgrade seaports to be able to receive larger cruise vessels, he noted.

The travellers come from the US, France, Germany, Canada, Brazil, Belgium, Switzerland, Australia, and New Zealand.

During their stay in HCM City, the passengers took part in a city tour, go shopping, and experience catering and entertainment services.

The ship left the city on October 5 for Nha Trang, Quy Nhon, Da Nang, Hue and other destinations.

According to cruise tourism companies, Vietnam is expected to receive a number of international cruise lines by the end of the year during the peak travel season.

As scheduled, three ships of the Royal Caribbean Cruise Line will enter the country each month.

These ships, mainly transporting American and European travellers, will arrive in HCM City, Da Nang and Ha Long Bay from December until the end of 2024.

The application process is made easy as tourists can go online, fill out the application form, pay online and get the approval letter.

The peak season for cruise visitors is from November to April (winter).

Besides upgrading seaport infrastructure, Vietnam should improve its cruise tourism promotion as most international tourists think of other countries such as Brazil, Russia, Thailand and Singapore instead of Vietnam, experts said.

Vietnam received more than 1.44 million international arrivals in the first eight months of 2022, a 13.7-fold rise from a year earlier when the border was still closed, according to a report by the General Statistics Office.