HCM City to kick off bumper sales month for tourism

HCM City to kick off bumper sales month for tourism

The event will be held at about 1,000 sales points that meet the city's tourism service standards as well as trade centres, traditional markets that attract a large number of 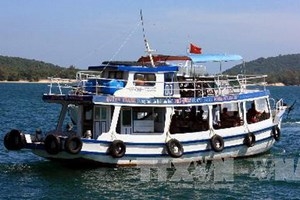 Phu Quoc island district of the Mekong Delta province of Kien Giang welcomed nearly 370,000 tourists in the first ten months of this year, fulfilling nearly 97 percent of its yearly target.

The figure represents a year-on-year increase of 34 percent with over 72,500 foreigners. During the January-October period, the locality earned more than 1 trillion VND (47 million USD) from tourism, surpassing the set target of 4.2 percent and up 33 percent against the same period last year.

Visitors to Phu Quoc are expected to come in droves on the occasions of Christmas and New Year holidays.

With 109 accommodation facilities, the island offers an array of entertainment activities such as fishing, scuba diving, visiting pearl farms and swimming in the sea.

Apart from promoting its image, the district has sought ways to attract more investment in the tourism sector, especially foreign investors.

According to a master plan on Kien Giang socio-economic development by 2020, Phu Quoc island will become a special administrative-economic zone by the end of this decade with its role as a national and international hi-end ecotourism and entertainment centre and a regional financial hub.

It will also act as a national and regional forest and sea biodiversity conservation centre that holds a special position in security and national defence.

The island posts an annual economic growth rate of over 24.5 percent, a 5.2-fold increase from 2004 when the Prime Minister approved its overall development plan. Its per capita income in 2013 is estimated to reach 70.3 million VND (3,500 USD).

Phu Quoc has so far attracted 206 investment projects valued at over 4 trillion VND (190.5 million USD). Of the total, 13 projects have already been put into operation.

The Co Son Pagoda in the Cuu Long (Mekong) Delta province of Long An is well known for its name "Floating Pagoda" as the more than 200-year-old pagoda has never been submerged during the Delta's annual flooding season.

The three-compartment pagoda was built on a islet along the Vam Co Tay River in Ca Ban Hamlet in Vinh Hung District's Tuyen Binh Commune in the most-flooded area in the Dong Thap Muoi (Plain of Reed) region. The pagoda is surrounded by many trees and flowers all year-round.

Local people and authorities say in years when the flood water reached record highs, 11 islets around the pagoda were submerged deeply. But the pagoda, whose location is not much higher than the other 11 islets, remained unflooded.

Why has the pagoda never been flooded? The answer is waiting for scientists' research about the islet height and the water flow around the islet. Now is the ideal time for visitors to visit the floating pagoda as it attracts a large number of visitors during the flood season, which occurs during July and November.

The Vietnam National Administration of Tourism (VNAT) has announced the Vietnam Tourism Awards 2012 will be presented at a ceremony on December 4.

The awards, the highest in the sector sponsored by VNAT and the Vietnam Tourism Association, will honour 62 outstanding travel agencies, hotels and hospitality services providers and carriers in the country.

2013 marks the 13th year of the Vietnam Tourism Awards.

Vietnam strives to welcome about 10 million foreign visitors in 2020 and 18 million 10 years later. The country has set a target of earning 18 billion USD from tourism activities in 2020 and 36 billion USD in 2030. 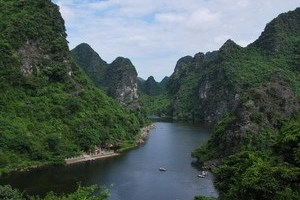 Prime Minister Nguyen Tan Dung has approved the master plan on developing tourism in the Hong (Red) River Delta and the northeastern coast until 2020, with a vision to 2030, reported the Party online newspaper.

It is striving to become the leading destination for tourists in the country by 2030.

Regarding developing tourism markets, attracting both foreign and domestic tourists was stressed in the master plan.

For domestic tourism, the region was asked to develop tourism within itself, as well as in neighbouring regions, with the focus on tourists visiting for recreation, relaxation, festivals, shopping and spiritual purposes.

The Red River Delta region is a cradle of the wet rice civilisation and is proud of its outstanding cultural and historical values. Numerous significant architectural relics, traditional festivals and ancient villages have cemented the region's unique and rich culture.-

Authorities in the central Quang Binh province and the Vietnam Helicopter Company (VHC) have just reached an agreement to use helicopters for tourism next year.

VHC will also offer helicopter medical services for those on adventure tours to Son Doong cave in Bo Trach district.

The national flag carrier Vietnam Airlines is offering a discount of 30 percent on the Ho Chi Minh City-Singapore route, with a return ticket now costing around VND1.25 million (US$59).

Vietnam Airlines has also launched a special fare of VND190,000 ($9, not including tax) on HCMC-Singapore flights departing at 6.25 pm from now until December 31. The promotional program will apply for passengers who buy tickets 14 days before departure.

Added to this, Vietnam Airlines is also offering the ‘Golden Moments’ promotional program on some domestic routes since November 12.