Large economies such as the US, the major partners of Vietnam, are recovering rapidly, which could bring more trade and investment opportunities to Vietnam. But economists have warned of high inflation. 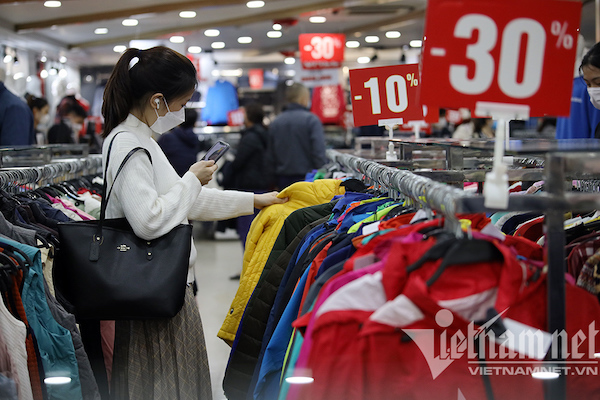 The Asian Development Bank (ADB) on December 14 adjusted its prediction about the economic growth rate in Southeast Asia in 2021 as countries in the region imposed restrictions to cope with the Delta variant.

The predicted growth rate for 2021 was lowered by 0.1 percent to 3 percent. Meanwhile, the predicted rate for next year has been lifted to 5.1 percent as the economies are expected to loosen restrictions and recover business activities.

The inflation rate is expected to be 2.1 percent this year and 2.7 percent next year, which will permit a more adaptable monetary policy and support the efforts to recover the economy after the pandemic.

The major risk for growth prospects is the increase in the number of Covid-19 cases.

The results confirm the US expects to recover the economy from the minus growth rate of last year.

China is expected to have a stable recovery, but experts warn of risks. Its policies on management of the real estate sector, its strict zero-Covid policy, and the risk of energy shortages may put pressure on inflation and consumption.

Europe is facing difficulties, including power price increases, supply chain disruptions, and a new Covid wave. However, European economies are still expected to have a strong recovery.

In late November, the EU raised its expected growth rate from 4.8 percent to 5 percent. However, the strong recovery in Europe may lead to material shortages and price increases on goods. Inflation is expected to reach its peak of 2.6 percent this year before decreasing slightly in 2022.

Meanwhile, Japan’s economy for the fifth time in the last eight quarters saw a minus 3 percent in growth rate in the third quarter. IMF, in its October forecast, reduced the growth rate of the economy to 2.4 percent from 2.8 percent.

ASEAN countries are seeing production going up again as restrictions have been loosened. Indonesia has reported a PMI (purchasing managers’ index)of 57.2 (it was 52.2 in September), and Singapore 54.5.

Vietnam’s economy in the next months will still be affected by the pandemic. The country has changed from a zero-Covid approach to safe adaptation to new circumstances, and is expanding vaccination coverage.

In the December report on Vietnam’s macroeconomy, the World Bank (WB) said the number of deaths out of the total number of Covid cases is on the decrease thanks to better vaccination coverage. The economic situation has improved, while the IIP and total goods and service retail turnover increased for the third consecutive month.

The CPI has increased slightly because of higher fuel demand, the recovery of non-food and foodstuff products and an increase in logistics costs, while credit growth remains stable, providing ample liquidity. The budget has had one more month of surplus thanks to higher state budget collections.

The ‘living together with Covid’ approach requires agencies to continue to act cautiously and quickly in terms of vaccinations, social distancing, testing and medical quarantine.

A reasonable fiscal policy is also necessary to stimulate demand from the private sector, which will help the economy recover.

To reach that goal, economists have suggested providing financial support to workers and households adversely affected by Covid-19.

With the current fiscal situation and concern about budget expenditures, one solution is reducing the VAT in 2022 to help increase private consumption.

European businesses are now more optimistic about Vietnam’s business environment after the lockdown was lifted. The optimism is shown in EuroCham’s Q3 BCI (Business Climate Index) which increased slightly from a record low level in September.

The retail decline slowed down in October when the government’s Resolution 128 on adaptation to the pandemic was released. However, economists predict the decline will prevail for the entire year of 2021.

Businesses are still facing problems arising during the fourth Covid wave, including production chain disruptions, higher operation costs, a productivity decrease and labor shortages. In such conditions, there are risks of more bad debts.

Regarding the size of the proposed economic stimulus package, economists believe that it should be from 2-3 percent to 8-10 percent of GDP for 2022 and 2023. However, no final decision has been made.

After a very tough few months brought on by severe lockdowns, the Vietnamese economy is finally on firmer ground, according to Tim Evans, CEO of HSBC Vietnam.