Hoi An advised to limit travelers to 5 million a year

Hoi An ancient town, a well-known destination for tourists, has been advised to receive no more than 5 million travelers each year so that the slogans ‘the most wonderful city’ or ‘for a cleaner Hoi An’ have real significance.

A family in HCMC recently spent two days and one night in Hoi An. During the day, they visited craft villages such as Tra Que vegetable and Thanh Ha pottery villages under the scorching sun. At night, when it was cool, they strolled along the banks of the Hoai River. 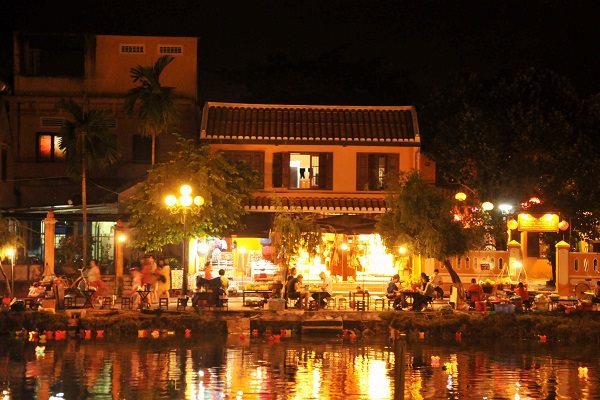 They knew that the old residential quarter at night would be noisy and crowded, but they still hoped they would still enjoy their time.

However, they were disappointed. “It was too crowded. Nothing could be seen except a lot of heads,” the husband complained.

Observers commented that Hoi An Town at night, especially on weekends, is overloaded with people.

Tourists flock to the two streets along the Hoai River, 2 kilometers long from An Hoi to Hoi An Market, where there are restaurants and ancient houses with red tile roofs lit with colored lanterns.

On river bridges, travelers have to jostle and weave their way through traffic to reach the other bank of the river.

Meanwhile, boats carrying travelers on the river shorten their itineraries because they want to serve travelers for bigger profit.

The small streets in the central area of Hoi An such as Le Lo, Phan Chau Trinh and Phan Boi Chau are often crowded.

According to Vo Phung from the Hoi An City Radio and Television, Hoi An’s tourism is developing very rapidly. In 2018, Hoi An received 5 million travelers, including 3 million foreigners.

In the first three months of the year, Hoi An received 1.32 million travelers, an increase of 20 percent over the same period last year.

He admitted that the rapid growth has brought big benefits to Hoi An, but has caused social disorder and tourism waste.

Foreigners also have noted that Hoi An is getting overcrowded.

Christopher Dunn, who lives in Hoi An, said he chose to live Hoi An three years ago because the ancient town was green and peaceful. However, the Australian said Hoi An has become less green because of too many homestays and hotels, and less peaceful because of many 4-seat and 50-seat buses going in and out of Hoi An.

Some analysts have advised Hoi An authorities to reprogram local tourism development, saying that the number of tourists is beyond the capacity that the town can bear.

Hoi An homestay services in difficulties

More homestay services in Hoi An Town are losing customers.

Hoi An to renovate French Streets

Local authorities and French Consulate to give what is known as the "French Streets" a facelift.