The annual “Xuan Que Huong” (Homeland Spring) programme, a run-up to the Lunar New Year festival, was held in Hanoi on January 31with a string of cultural activities for overseas Vietnamese (OVs).

The annual “Xuan Que Huong” (Homeland Spring) programme, a run-up to the Lunar New Year festival, was held in Hanoi on January 31with a string of cultural activities for overseas Vietnamese (OVs). 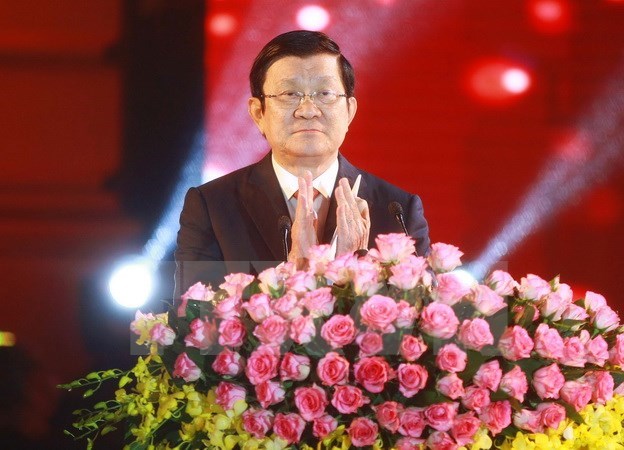 Addressing the programme, the President highlighted Vietnam’s major achievements in various fields, attributing these achievements to significant contributions made by Vietnamese abroad.

Apart from marching together with their homeland, the OVs have also joined hands in building a united community and integrating into their host countries, the leader noted.

2016 is an important year, as it is the first year of actualising the 12 th National Party Congress’s Resolution and the Socio-Economic Development Plan for 2016-2020, he said, adding that the election of deputies to the 14 th National Assembly will also take place this year.

The President also pointed out opportunities and challenges stemming from complicated regional and global situations, globalisation and international integration.

Given this, he called on Vietnamese at home and abroad to unite and work harder for the cause of national construction and defence in order to turn Vietnam into a wealthy country.

President Truong Tan Sang used the occasion to thank foreign Governments and people for supporting overseas Vietnamese as they work to stablise their lives and integrate into their countries.

The State leader and representatives of the OVs burnt incense and released carp at the President Ho Chi Minh Relic Site.

Hosted by the State Committee for Overseas Vietnamese Affairs, the Foreign Ministry and the municipal People’s Committee, the “Homeland Spring” programme has become an annual event anticipated by OVs who return home for Tet.

Vu Quoc Trung, a Vietnamese in Austria, noted his joy at seeing changes in his home country, especially when it came to new foreign investment.

According to Trung, about 7,000 Vietnamese in Austria turn their hearts toward the homeland through art and charity programmes.

Trung expressed his belief that the newly concluded 12th National Party Congress will create breakthroughs for the country’s development, and that under the leadership of the Party and State, Vietnam will thrive.

Returning from Thailand, Vu Quoc Loi voiced his hope that Vietnamese in the country continue to work as bridge, enhancing the friendship and cooperation between the two countries.

Vo Thi Thanh Tuyen, a Vietnamese in the US, said Vietnam has affirmed its important role and position in the international arena and the Asia-Pacific region, noting her hope that the country will integrate more deeply into the world.

The Vietnamese community in the US have worked to preserve their mother tongue and promote Vietnamese culture in the host country, she said.

More than 200 Vietnamese in Beijing gathered at a meeting at the Vietnamese Embassy on January 30 to welcome the Year of the Monkey.

In his remarks, Ambassador Vu Tien Dung briefed the overseas Vietnamese on their homeland’s socio-economic situation last year as well as the country’s major achievements in international integration and foreign relations.

Regarding the Vietnam-China ties, the diplomat affirmed that the relationship has developed fruitfully, as evidenced by high-level visits and meetings during which the two sides reached agreements on measures to deepen their comprehensive strategic cooperative partnership and address remaining differences.

He also applauded the contributions made to national construction and development at home by the Vietnamese community in China.

The same day, the Vietnamese Embassy in Malaysia held a get-together with the participation of more than 300 Vietnamese people and international friends in the country.

Speaking at the event, Ambassador Pham Cao Phong hailed the activities conducted by the Vietnamese community in Malaysia in 2015, especially their reception for Prime Minister Nguyen Tan Dung during his official visit to the country.

During the Prime Minister’s visit, the two sides agreed to upgrade their relationship to a strategic partnership, he noted.

Also on January 30, a similar event was held at the Vietnamese Embassy in Japan to mark the coming arrival of the Tet holiday.

Ambassador Nguyen Quoc Cuong highlighted Vietnam’s achievements over the past year, most worthy of note being the recently concluded 12th National Party Congress.

The Vietnamese community in Japan has expanded rapidly with more than 120,000 people at present, double the figure recorded in 2013, he said, praising their contributions to national construction and defence as well as the friendship and cooperation between Vietnam and Japan.